Meet Carmen Buck, photographer and author of "Just See Me - Sacred Stories from the Other Side of Dementia"

If you're looking for a visually stunning book that combines the stories of those with Alzheimer's and dementia along with beautiful photography, please check out Carmen Buck, author of Just See Me - Sacred Stories from the Other Side of Dementia. 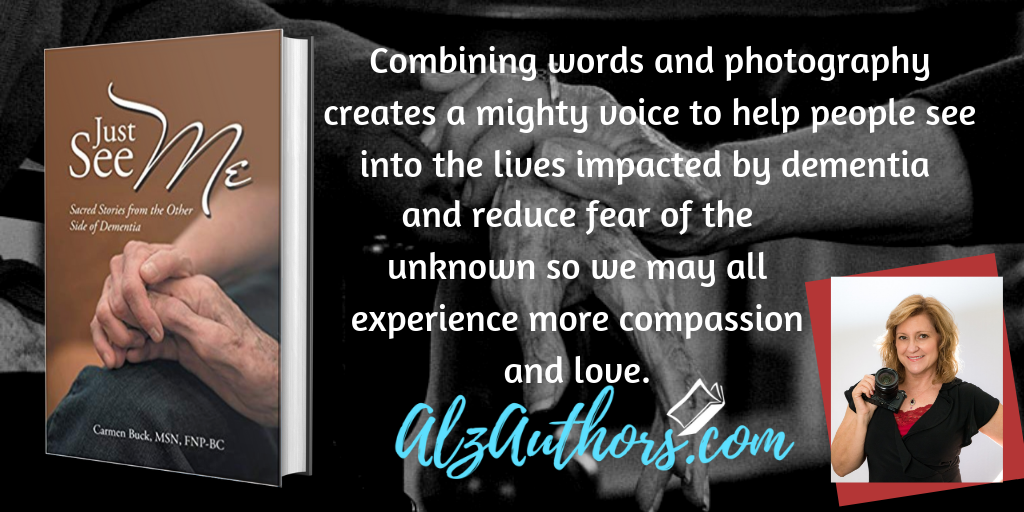 Carmen shares:
"I dove deep into my love of photography capturing memories especially for those impacted by dementia. Images convey feeling and can say so much about living with dementia making photography a wonderful tool to raise awareness. Combining words and photography creates a mighty voice to help people see into the lives impacted by dementia and reduce fear of the unknown so we may all experience more compassion and love. Just See Me-Sacred Stories From the Other Side of Dementia gives a voice to families who were otherwise overwhelmed with life and serves as a big step toward reducing stigma."

You can read Carmen's entire post on AlzAuthors.com by clicking here.
Posted by Jean Lee No comments:

Read this week's powerful post on AlzAuthors.com by Jamie Ten Napel Tyrone, Author of Fighting for My Life–How to Thrive in the Shadow of Alzheimer’s

This week AlzAuthors.com welcomes Jamie Ten Napel Tyrone, author of  Fighting for My Life: How to Thrive in the Shadow of Alzheimer's.

Jamie shares:
"In 2009 ... I inadvertently discovered that my genetic status puts me at a 91 percent chance of getting Alzheimer's disease. As I opened my test results with complete naivety and lack of genetic counseling—much like the experience with direct-to-consumer companies like 23andMe—I was informed that I have two copies of the ApoE4 gene that will forever shadow my life." 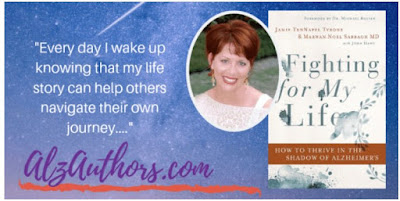 Read the entire post by clicking here to go directly to AlzAuthors.com.


I'm so happy to be able to share other books with the readers of Alzheimer's Daughter. Each story helps and supports someone whose life is currently impacted by Alzheimer's and dementia.

Julie Gorges, writes “I’m Your Daughter, Julie: Caring for a Parent with Dementia” about her mother's path through Lewy Body Dementia 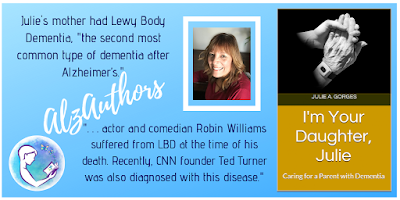 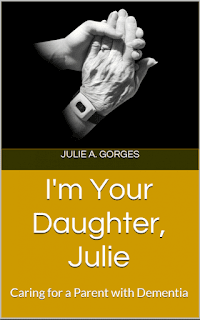 I’m Your Daughter, Julie: Caring for a Parent with Dementia is the fourth book I’ve published, but the one that I’m most proud of – dedicated to my Mom who bravely fought Lewy Body dementia (LBD) and the 15 million noble unpaid caregivers – most of whom are family members – who care for a loved one with dementia.
LBD is a cruel combination of Alzheimer’s and Parkinson’s symptoms that render people helpless both physically and mentally toward the end of life. It is known for tormenting its victims with vivid hallucinations, delusions, and night terrors. Sometimes my mother was in a complete state of panic because she thought a bear was in the laundry room, a tiger was swimming in the pool, or baby lions were squirming in the bottom of her bed.
I had never heard of this brutal disease before Mom’s diagnosis. However, LBD is not rare. According to the Lewy Body Dementia Association (LBDA) and the Mayo Clinic, it is the second most common type of dementia after Alzheimer’s. Thankfully, more people have become aware of this disease after it was discovered that actor and comedian Robin Williams suffered from LBD at the time of his death. Recently, CNN founder Ted Turner was also diagnosed with this disease.
Still, much remains to be done to raise awareness. As LBDA’s site points out, although this disease affects an estimated 1.4 million individuals and their families in the U.S. alone, it is currently widely underdiagnosed, and few individuals and medical professionals are aware of the symptoms, diagnostic criteria, or even that LBD exists.
One of the reasons I wrote this book is to draw attention to this lesser known type of dementia. Admittedly, at first, I couldn’t immediately immerse myself in the painful memories of watching Mom slowly lose her mind, deteriorate physically before my eyes, and take her last breath. Nevertheless, eventually, I felt compelled to write the book out of a desire to help others learn from my experiences, successes, and mistakes as a caregiver.This book is a memoir of sorts sharing my intimate story, but it is also a practical guidebook that I would have found beneficial during those difficult years. Let’s get real. Like many who care for family members, I was unprepared, inexperienced and untrained when I was thrust into the role of full-time caregiving. Most of us are not nurses or professional caregivers. The books I purchased on the subject were thick and overwhelming. Time was limited, and I didn’t need to know all the science behind what causes dementia or try to decipher essential information from fluff often used as filler to meet a publisher’s page requirement. In a short amount of time, I needed to know how to communicate with my Mom when she was being unreasonable, how to help her get dressed when she became immobile, and how to keep my sanity. That’s why my concise book is about 100 pages, easy-to-understand, and to-the-point.
In addition, the mourning process for a caregiver is somewhat different and I wanted to share ways that family caregivers can move forward after their loved ones die. I wanted to share ways they can heal, reinvent themselves, and go on to live a fulfilling and happy life.
By sharing my journey with others, I wanted to make the process a bit easier and provide some comfort to all those losing their loved one a little bit at a time like I did.

About the AuthorJulie A. Gorges is an award-winning journalist and author. She is also a blogger at BabyBoomerBliss.net, recently recognized as one of the top baby boomer blogs on the web. Julie’s work has appeared in dozens of national magazines including Woman’s World, True Romance, and Cricket. During her mother’s final years of life suffering from Lewy Body dementia, Julie was a full-time caregiver.
I’m Your Daughter, Julie: Caring for a Parent with Dementia: Amazon
To connect with Julie on her website, blog, or social media sites:Author website: www.juliegorges.comAmazon author’s page: www.amazon.com/author/juliegorgesFacebook: www.facebook.com/julieagorgesTwitter: www.twitter.com/JulieGorges Blog: www.babyboomerbliss.net
Posted by Jean Lee No comments: