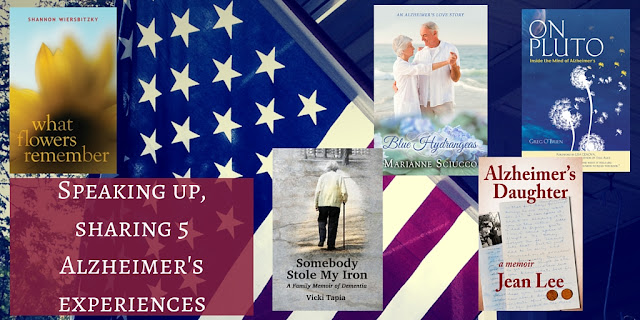 Caregivers. We are all caregivers. As humans we care for one another, or we should. Most especially, we care for those close to us.

But the logical timeline of maturation, love, and respect tipped topsy-turvy when my parents reached their eighties. They slowly began to lose their minds and act irrationally. I became concerned for their safety. I sought out medical treatment, and they were both diagnosed with Alzheimer’s disease on the same day.

Over the next decade I became the parent to my parents. I gradually, painfully made decisions they opposed in order to protect their well-being. In the process, I felt guilty taking everything away from the people who had given me everything.

As I struggled to keep the pieces of my life together­––my marriage, my own family, my career and the care of my parents­­––I grasped for resources, but found few. I am a positive person, therefore I sought uplifting resources, but much of what I read was written with a negative undertone. I found books about the ill treatment of a caregiver by an unreasonable loved one, about adult siblings who fought, and about children who had grown up with angst toward a parent continuing through caregiving years. Even so, every time I found a kernel of truth, I felt as though I could keep going, someone else was brave enough to share this upside down world as well.

I came to the conclusion that sharing my story might help others.

Alzheimer's Daughter details my journey caring for both parents who were diagnosed on the same day. It is written with wincing honesty about the cruel affects of the disease, but a WWII love story held together by faith and family is contained within the pages.

Over the past several months, four other authors from across the country and I have crossed paths, all of us affected in some way by Alzheimer’s disease/dementia.

The five of us have joined together to recognize those unsung heroes, caregivers. From each other we learned that all of us felt compelled to write our books, hoping to make a difference…hoping that we might make the pathway of others traveling this road a little less painful and lonely. Perhaps you will find comfort and support within our pages.

Somebody Stole My Iron by Vicki Tapia

Vicki details the daily challenges, turbulent emotions, and painful decisions involved in caring for her parents. Laced with humor and pathos, reviewers describe her book as “brave,” “honest,” “raw,” “unvarnished,” as well as a “must-read for every Alzheimer's/dementia patient's family.” Vicki wrote this story to offer hope to others, to reassure them that they’re not alone.

Marianne describes herself as a writer who happens to be a nurse. This work of fiction is based upon her care for the elderly. It's a tenderly told love story about Jack and Sara, owners of a New England bed and breakfast. Sara is stricken with Alzheimer's and Jack becomes her caregiver.

What Flowers Remember by Shannon Wiersbitzky

Shannon writes this work of fiction through the eyes of a small-town preteen girl, Delia, whose elderly neighbor, Old Red Clancy is failing mentally. The aged gentleman has to be placed in a care facility, but Delia will not let him wither away. She devises a way for the whole community to remind Old Red how important he has been in all of their lives.

On Pluto: Inside the Mind of Alzheimer’s by Greg O’Brien

Diagnosed with early-onset Alzheimer’s, Greg O’Brien’s story isn’t about losing someone else to Alzheimer’s, it is about losing himself a sliver at a time while still fighting to live with Alzheimer's, not die with it.
Posted by Jean Lee