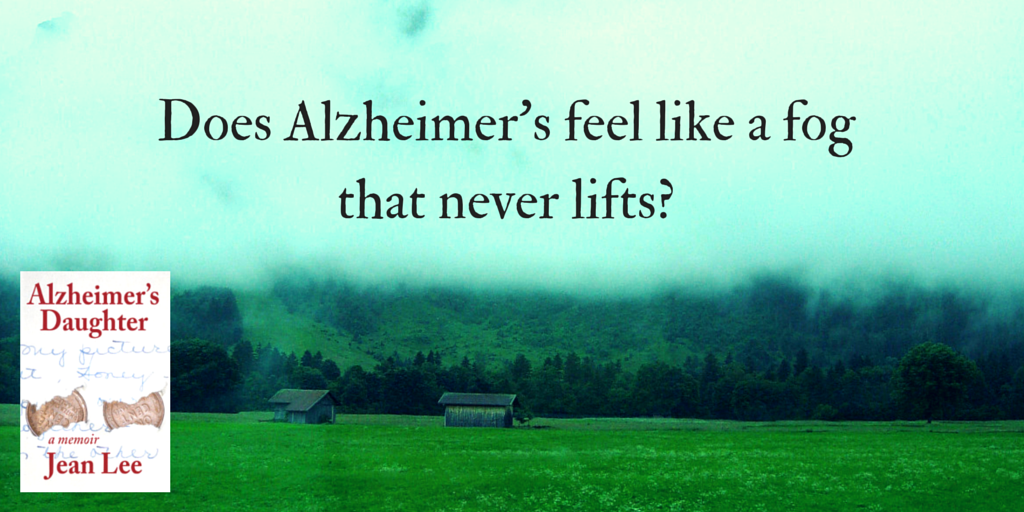 Blogging is difficult for me.

When I began this blog I posted excerpts of chapters of Alzheimer's Daughter, which was then a work in progress. Beyond that, coming up with blogposts was time consuming. I wanted to spend my time writing my book, not blogging. Sometimes a great blog topic would come to me and I'd even begin a draft blogpost, but by the time I returned to the draft the central idea had faded.

Most of those blogposts were prompted by an image, often old family photos or more recent photos I'd taken.

Even though I was frustrated by blogging, I found I loved Twitter.

Twitter allows me to connect with like-minded people all over the world who write or share an interest in Alzheimer's or dementia.

The problem with Twitter is that each tweet is limited to 140 characters, including spaces and punctuation. Most of the time, I want to say more.

Another downside to Twitter is that the feed zips by so fast with mostly text, hashtags, @s, and links.

So Twitter was too short and blogging required too much length, but I hit the jackpot when I recently found an app called Canva (free from Canva.com). Look it up. Try it out. Using Canva, I can add text, overlays, and special effects to my own pictures. These pictures are colorful in a Twitter feed, standing out from the plain text and links of most tweets.

As I tweet pictures created using Canva, I find there is always a little more I want to say to explain the picture.

My tweets are always Alzheimer's related, so I'm going to try posting them on this blog too, with just a little more explanation.

This picture of the dense layer of fog reminds me that Mom and Dad often seemed to be foggy in the early stages of the disease. They just couldn't quite retrieve the word they wanted to use, or they couldn't stick with a concept long enough to complete a task.

The movie, Still Alice, conveyed this idea well. When Alice was lost, whether it was in a familiar place, or lost in a task, the camera blurred. It matched what I imagined my parents must have felt.

I'm tinged with fear whenever I can't recall a word. I haven't resorted to replacing the lost word with "thing-a-ma-jig" or "what-ja-ma-call-it" yet. I guess when I do that, I'll really worry.

If you love Twitter too, follow me at JeanLee18. If you haven't yet given it a try, join and observe for a while, then send me your first tweet.
Posted by Jean Lee No comments:

After four years of writing, proofing, revising, querying, happy moments, and nervous stomach aches, Alzheimer's Daughter was published on January 16, 2015, the day that would have been my parents' 71st wedding anniversary.

I began writing Alzheimer's Daughter shortly after my mom died. Dad lived another year. I kept writing, trying to find resolution. The words on the page became my daily connecting point with my parents. Through my words I felt as though I was able to explain to Mom and Dad what happened to them, as well as the actions my sister and I had to take to keep them safe.

I am the kind of person who reads for support. I read to learn. So, during the path of my parents' disease, I searched for books to help. I found many about the medical science and theories of prevention of Alzheimer's through lifestyle and diet, but there were few personal accounts.

As soon as I'd find a book that looked good, I'd devour it and search Amazon for another using the key word 'Alzheimer's,' looking hundreds of books deep. Many were negative in tone with longstanding strife between elderly parents and adult children, and even greater disagreement between siblings trying to share the caregiving role. I know there are plenty of negatives to this disease, and in Alzheimer's Daughter I write about those challenges honestly, but I needed positives to keep me afloat. So, I wrote Alzheimer's Daughter, combining love with honesty. I wrote what would have helped me.

I've been asked if writing brought peace. I'd like to say yes, but it really didn't. The entire time I wrote I struggled because I felt guilt. Alzheimer's is a private disease. It's hard to talk about.

Right up until the actual moment of pushing the 'publish' button, I felt anguish because I didn't know if I had the right to tell this story.

Peace has come to me through reactions to the book and reviews.

"There are smiles and tears in this tale of ultimate love, that which sees this family through a myriad of very hard choices. This book is worth reading, worth saving, and worth consulting if the unfortunate need arises. There are many books written about Alzheimer's. This one opens the door and let's us in."


"This book offers a deeply personal glimpse into the life of a family battling Alzheimer’s, from its earliest stages – the odd forgetfulness, the tiny mistakes – to diagnosis, to denial, to the debate about safety, and managing simple daily life, to dignity, to end of life decisions, all told in a thoughtful, useful manner to guide others through this same process.
Alzheimer’s Daughter is a book that will bring knowledge and solace to those grappling with this illness."


"Lee’s familiar Alzheimer’s memoir format is elevated to a classic love story by the revelation of Ed and Ibby Church’s extraordinary courtship and marriage. World War II lovebirds, the couple’s timeless love letters are shared at the beginning of each chapter, written during their separation while Ed served in the Army. This touching correspondence adds a romantic element to keep the couple’s devotion, for each other and their family, central to their inevitable fate.
The dual diagnoses and deterioration, while difficult for Rosie and Annette to manage as caregivers, turns out to be the final blessing bestowed upon Ed and Ibby for a life well lived. The elderly couple’s oblivion to their plight helps them fade away together hand in hand, with neither forced to endure the other’s incapacity.
Alzheimer’s Daughter is a beautifully written tribute to the extraordinary love and lives of the author’s parents. The story offers a map on how to maneuver through the pitfalls of dementia care while honoring our parents with dignity and love through faith. The memoir reveals a modern day path many others will travel as dementia snowballs into an epidemic as baby boomers age. The journey of Alzheimer’s Daughter leads the reader through a tragic but rewarding love story with heart, like a true version of The Notebook."

If I hadn't written Alzheimer's Daughter I would have only shared small parts of this story in hushed tones with those also on this journey. Instead, by releasing the story, I hope it will help others search for light in the darkness, sunshine through the clouds of Alzheimer's.

Wishing peace and calm for those with whom I share a caregiving brotherhood and sisterhood.