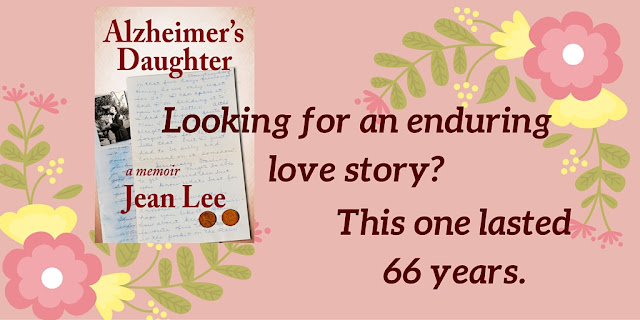 When I wrote Alzheimer's Daughter I was plagued by guilt from exposing what I thought were privacies.

Even though I tried to bury the manuscript many times, it kept coming back, haunting me when I was doing the mundane such as driving, working in the yard, laundry. Beautiful phrases entered my dreams and woke me at hours too early to be called morning.

Mom and Dad's love letters, from their early dating through their early marriage, 1943-1944, found their way into the book as chapter beginnings. These letters speak the language of WWII. She tells him he looks 'swell' in his Army uniform. He wishes he could mail himself to her. He compliments her on the perfume she spritzed on his last letter. She tells him she received $2 as a bridal shower gift and put it immediately into War bonds. I almost didn't publish the letters because I was convinced it was another breach of their privacy.

I thought I was writing about Alzheimer's. But reader's who review the book speak equally about the love story. Without Mom and Dad's voices, Alzheimer's Daughter would be depressing and nothing but a sad decline. Their letters tell of the enduring love which began more than half century ago and sustained them to their dying breaths. If only we could all be so blessed.

Thank you, Ed and Ibby for entering the manuscript and letting your own love shine through to readers.

I post this as Valentines Day, the season of love, approaches but love has no time or date. Love never ends.