* * *
June 8, 1942
My Dearest Ed,
Have I told you lately how beautiful our diamond is? Nothing has ever meant so much to me as our love. Even though we may have to wait for the duration of the war, I love to think with you and write to you about our life together. Do you mind, darling? I hope you don’t think I’m too sentimental––but women are worse than men.
I wouldn’t change places with anyone. If you can wait to marry, so can I, honey. Just knowing you love me makes all the obstacles and the hardship of being separated look smaller. I can take it, but I wish it was our honeymoon.
Yours forever,
Ibby
* * *

As a little kid, I listened to the old stories––hearing them over and over.
As a teenager I drummed my fingers while Mom and Dad droned on––blah, blah, blah––about the good old days.
As an adult, I eavesdropped as Grandma and Grandpa recounted their lives to my children.
By the time I wished I’d listened more closely, their memories were gone. What follows are my own, written with the hope I can preserve what Alzheimer’s stole, and you’ll come to know Ed and Ibby as I did.
My dad, Edwin, was born in December 1919, growing up in the small town of Wellington, Ohio. His father had a walking mail route. Dad told me stories about riding his bike––pumping uphill and coasting down––in the countryside and in town to carry ‘Special Delivery’ packages after school and during summer, to earn extra money for the family.
My mom, Elizabeth “Ibby”, born in June 1920, grew up on a farm five miles south, in Huntington Township. Times were hard for both, but harder for Mom. Reminding me how lucky I was to have new school shoes each autumn, she’d say, “When we were girls, I grew into my older sister, Lydia’s shoes, and my little sister, Dottie, grew into mine––whether soiled with manure or worn through with holes. We didn’t have money for new shoes till Momma saved enough coins, skimmed from the milk check.” Mom’s father died in his fifties before I was born. “Daddy worked so hard trying to keep the cows alive, that one day he keeled over of a heart attack.” I imagined him dropping dead while milking a cow. I’m not sure that’s how it happened. I never asked.
Ed and Ibby graduated from Wellington High School in 1939. They’d shared the lead roles in their Senior class play, but never courted until they went on a double date to Chippewa Lake Amusement Park after graduation. Dad’s girlfriend was a sister to the boy Mom dated. When my sister, Annette, was a teenager––and I a tyke, Dad would chuckle teasing that the brother-sister pair didn’t want to ride the roller coaster, but he and Ibby­–the daredevils––did. Dad would whisper, and Annette and I’d lean close as he scandaled, “I snuck a kiss from your mom at the end of the ride, in the dark Tunnel of Love.” The corners of Mom’s mouth would turn up in a snicker-held-back smile, her cheeks glowing red. I’d giggle and Annette would roll her eyes as Dad tried to pinch Mom’s backside while kidding that they’d left the brother and sister dateless. 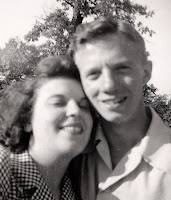 Ed enlisted in the Army right after high school, during the height of WWII, prompted by his dad, a World War I veteran. I don’t remember much about those stories, except he’d tell my sister and me, “Recruits stood in line, holding documents, while officers counted us into three groups; ‘Ground!..Machinery!..Cavalry!’” Assigned to the Horse Cavalry, Dad had never been close enough to a horse to smell one, let alone ride one. He convinced his sergeant he was more proficient with typewriters and adding machines than horses, so he was reassigned to the finance department.
During Dad’s enlistment, Ed and Ibby grew a distant love affair based on short furloughs and long letters. They feared Ed could be shipped out any day. With a wink toward Mom, Dad used to tell anyone who’d listen, “After Pearl Harbor, newspapers headlined it could take 20 years to win the war. We couldn’t wait that long.” 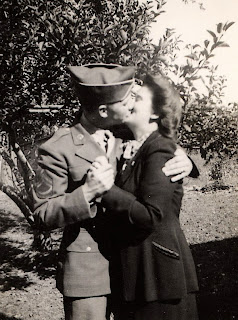 Four years after that Tunnel of Love kiss, Ed and Ibby wed on January 16, 1944, during a five-day furlough.
They never talked much about their wedding. An old photo shows only their parents and siblings, ten in all, attended. She’d say, “Married is married––it’s what you make of it that counts” 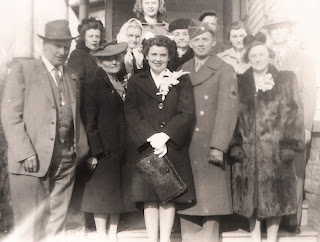