* * *
April 8, 1944
My Dearest Wife,
Two dresses the past week? Well, all I can say is there’ll be a day I’ll get a whole new outfit and we will sure hit the Eater parade. Honestly, honey, I don’t give a darn how many dresses you have, and I want you to look nice all the time.
Honey, you’re sweet and I can’t get over how nice you looked when I was home.
That low neckline blouse gets me, dear. I used to neglect to tell you about how nice you looked, but I’m sure you always knew I thought you looked tops. I realize more and more now that we are married, it’s the best thing that ever happened.
Love, XXXXXXXX
Forever and ever,
Ed
* * *

In July of 2009 we made our yearly trek to Tennessee. Both our son and daughter with their spouses and our little granddaughter were going along, as well as my husband’s brother and his family, so Tim and I were especially excited.
While in the hollow, we were out of touch with the rest of the civilized world. The condos had no phones, and we lost access to cell and internet once we left the highway. I’d left the phone number of the dock where we were staying with The Lodge and with Annette.
We were having a wonderful family vacation until mid-week, when one of the dockworkers rushed to our boat to bring me a message from my sister saying she’d received a call that Mom had fallen and broken her hip. I immediately borrowed the dock phone to call Annette for more information. She assured me she’d fly home to monitor Mom during surgery and told me I must not even think about leaving my vacation early. I can never thank Annette enough for taking care of this situation. Vacations in which all family members can be together are few and far between, and each is too precious to cut short.
I arrived home on Saturday, but Annette stayed until Monday so she could bring me up to speed. Mom was returned to The Lodge to be reunited with Dad for her recuperation; but this time, she’d never leave her wheel chair or stand again.

I had three weeks before summer break was over, so I spent numerous days each week trying to coax Mom to drink high calorie, meal-substitute liquids, to regain her strength. Not wanting anything, she turned her head, gagged, or just let the liquid run out the corner of her mouth. Mom’s condition progressively deteriorated, and she eventually began to refuse food.
As Halloween approached and the store shelves were full of candy, I’d take her little treats. She’d always loved chocolate, so I knew she’d eat M&Ms or Reese’s Cups. Even if she wouldn’t eat meals, at least I knew that she was getting some calories. She couldn’t string more than a few stammerings together, but she still wanted to connect with me. When she’d see the candy, she’d smile. Her eyes would lock with mine, light up and she’d roll them in a dreamy way. She’d lick and smack her lips in anticipation. When I’d put the candy in her mouth, she’d let it roll around. She’d close her eyes and lay her head back as though she was experiencing a preview of heaven. Her speech was gibberish, except she would repeat, “I love you,” every time I said it to her.
I knew she must be dying. Did she know? Was she just giving in? Was she dying on her own terms by starvation? Despite her pain and immobility, she remained pleasant and did not complain. She was peaceful.

I started taking short video clips of Mom when I visited so I could email these to Annette to keep her updated. These clips, showing Mom struggling to make words as her body became emaciated, conveyed the reality of her condition better than my words. I can’t watch the clips now, and have considered deleting them from my computer, except it seems a sacrilege to delete some of the last images of her life.
Annette and I began to pray Mom could remain peaceful until her passing. In October leaves turned vivid yellow, orange and red before falling. At the height of their beauty, flowers had been bitten by frost and withered. Every day grew shorter as the bright sunlight of summer dwindled with the darkness of winter encroaching. Everything Mom had believed about God and the cycle of life in nature was now mirrored at the end of her own. Just as a seed produced a flower, then reseeded another plant, she had been the seed that matured to give us birth. We’d produced her heirs, and now we’d go on after her death. As Mom dwindled like the autumn trees and plants, Hospice helped us let her go. 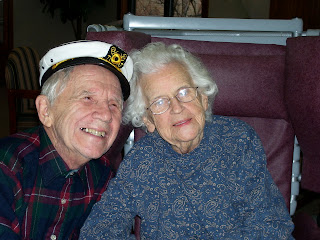 I met with a Hospice social worker on a dark October night as the blustery wind blew. I wished the wind could blow her straight to heaven but I knew loosening the tethers of her bindings to earth would now most likely be a long and slow process. Nurses advised she had six months or less to live. Hospice services would support Mom right at The Lodge, in the room she and Dad shared. Hospice aides would help with the extra care and equipment, such as a specialized wheel chair. I signed paperwork agreeing to no extraordinary measures, such as feeding tubes, IV fluids, antibiotics, or breathing help to extend her life. I felt an odd sense of darkness, but relief as I drove home that night in the cold fall rain. Now there would be no more trips to the hospital, no more trying to fix things––instead, we’d just let her go...