* * *
February 26, 1944
My Dearest Wife,
Honey I received the socks and the ID bracelet and they’re swell. The bracelet fits just right. I haven’t failed to wear it a day. Every time it catches my eye, I feel so proud. I think it’s because whenever I look at it, I remember the inscription on the back, “I’ll love you forever, Ibby.”
I’m looking forward to June when you will come up here and we can be together. I can’t wait. Sweetheart, I know you’re behind me all the time dear, and we’ll always pull together. When the going is tough, we’ll just pull a little harder.
Dear, I’m closing for tonight, but I’ll write tomorrow, I promise.
Forever and ever,
Your loving husband,
Ed
* * *
The confusion Mom and Dad experienced in their home continued at Lakeview Reserve. Soon after the move, clutter built in Mom and Dad’s apartment, especially the kitchen. Food buried the countertops. When I visited, I tried to organize and clean, but Mom was annoyed by my intrusion. I had the stove disabled so she couldn’t accidentally start a fire. After the evening meal in the dining hall, staff put leftovers in take-out containers. These containers stuffed Mom and Dad’s refrigerator. They ate these leftovers after the food had spoiled and Mom’s stomach issues continued.
Ibby had great difficulty learning how to use the stackable washer and dryer. Often I’d start the wash for them, and when I returned a week later I found the same wet, now mildewed, laundry still in the washing machine, untouched.
Ed lost the ability to understand and use money. Lakeview Reserve had a bank branch within the apartment community. Dad, Mom, and I had opened an account from which they could withdraw cash. He never used this bank, even with repeated prompting. When they went to the grocery, they handed the clerk a signed check and the rest of the transaction was completed electronically. Dad could never understand this. They had a bag full of coins, which they used for bingo, but soon they didn’t understand the process of paying for a bingo card or the concept of winning money.
Yes, Mom and Dad were confused, but they were confused together. One didn’t watch the other become progressively lost. They held each other’s hands as they became lost together. Despite their confusion, they remained content and happy, almost like cheerful children. Their ability to be happy gave me peace.
Mom had always loved music. Her piano had been moved to their new apartment. She’d play when I came to visit. Dad was so proud of her, and he’d request that she perform for anyone who visited, sometimes even pulling random people in from the hall to listen to Mom’s concerts. It was puzzling that despite the regression taking place in her ability to remember ordinary, everyday things and procedures, the musical part of her remained intact.


One Saturday morning, they greeted me, and asked me in. Then I saw them whispering as though they were plotting and had a secret. After some back and forth between them, they nodded at each other––as if to give the O.K.––sat on the piano bench, side by side, while Mom played, and both she and Dad––who was tone deaf––belted out a duet of "Don't Sit Under the Apple Tree With Anyone Else But Me." 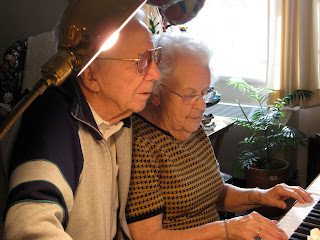 I thought I want to remember them this way forever...