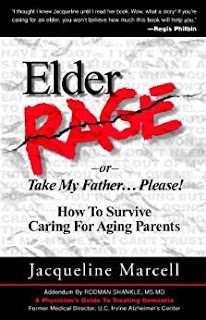 I never dreamed I’d have to give up my television career when I was thrust into caring for my challenging father and sweet mother. The experience was incredibly heart-wrenching, but once I finally figured everything out medically, behaviorally, socially, legally, financially, and emotionally, I became obsessed with writing my first book “Elder Rage”(with humor to make it palatable), and a passion to help others avoid the pitfalls I so unnecessarily experienced.

For eleven years, I pleaded with my obstinate elderly father to allow a caregiver to help him with my ailing mother, but he always insisted on taking care of her himself. Every caregiver I hired soon sighed in exasperation, “Jacqueline, I just can’t work with your father. His temper is impossible to handle and he’s not going to accept help until he’s on his knees himself.”

When my father’s inability to continue to care for my mother nearly resulted in her death, I immediately flew from Los Angeles to San Francisco to step in, despite his loud protests. It was so awful to have my once adoring father be so loving one minute and then call me horrible names and throw me out of the house when some trivial little thing set him off. I took him to several doctors and even a psychiatrist, only to be flabbergasted he could act so charming when he needed to.

Finally I stumbled upon a thorough neurologist who specialized in dementia, and put my parents through a battery of blood, neurological, memory tests, and PET scans. After ruling out numerous reversible forms of dementia and evaluating their many medications, he shocked me with a diagnosis of Alzheimer’s in both of my parents – something all their other doctors missed entirely!

I realized I’d been coping with a disease that appears to come and go, and that my father was trapped in his own bad behavior of a lifetime of yelling to get his way, which was coming out in intermittent over-the-top irrationality. I learned that demented does not mean dumb (a concept not widely appreciated), and he was still socially adjusted never to show his Mr. Hyde side to anyone outside the family. Conversely, my mother was as sweet and lovely as she’d always been.

It is quite a roller coaster ride how everything finally got worked out, but it also led me to the motto I have shared ever since: When life takes you to your knees and nearly destroys you, search for the Silver Lining because those hardships may also lead you to your highest purpose, passion and reward.

Since I had never written anything but a postcard and self-published, I am honored “Elder Rage” became a Book-of-the-Month Club selection, a caregiving book first. It received 50+ endorsements and 550+ 5-Star Amazon reviews, became required reading at numerous universities, and was considered for a film. It’s in print, audio, eBook, and autographed via PayPal.

Soon I was invited to speak at conferences and I adored being able to personally help so many caregivers. Eventually I became an international speaker on Alzheimer’s, and then a few years later unfortunately a speaker about my own invasive Breast Cancer. I also discuss Caregiver Stress and Illness, Elder Abuse, and Alzheimer’s Termed Type 3 Diabetes. To book a speaking engagement visit my website.

The Power of Community The quickest method to connect with someone is the virtual, social media connection with which we are all familiar. But unless a person crosses the precipice from virtual to real, there is no way to truly understand the benefit of in-person relationships.


That was the case for the AlzAuthors Management Team when all six of us convened at the 2018 National Caregiving Conference in Chicago. The team was generously gifted with the opportunity to gather from the corners of the world from which we hail: the states of Washington, Montana, Ohio, North Carolina, and New York, and the Canadian province of Ontario. Meeting for the first time was a highly anticipated emotional event that proved beyond beneficial to me. You think you know someone after spending months, or even years, emailing, texting, and video-calling, but what I discovered is you can’t truly know a person until extended real – not virtual – facetime occurs.


I met with as many conference attendees as I could and having done so, I came away concluding that community is everything. Like-minded individuals – at least 250 of them – gathered together for several days to feed the spirit, nourish the soul, and further the mission of being a support to the weary caregiver.

Regardless of which disease renders a person in need of care – Alzheimer’s, cancer, ALS, and the like – caregiver heroes need as much support as can be given. A powerful community goes a long way toward lessening a person’s burden, and as AlzAuthors has been known to say:

One can sing a lonely song, but we chose to form a choir and create harmony. 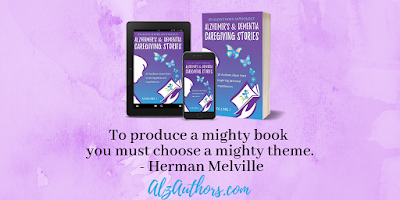 The AlzAuthors management team is pleased to announce the publication of Alzheimer’s and Dementia Caregiving Stories: 58 Authors Share their Inspiring Personal Experiences, Vol. 1. This poignant collection of stories grew out of the first year’s blog posts on AlzAuthors.com, from June 1, 2016 through May 31, 2017. Within its pages, you will be immersed in a world of writing about Alzheimer’s and dementia.

The contributing authors have all been touched by Alzheimer’s and dementia, whether they live with the disease, are caregivers, or simply care. They reveal the story behind their books, what made them sit down and painstakingly share their story, and what they have gained from doing so.

This year-long project was made possible through the international collaboration of seven women, all daughters of dementia, your AlzAuthors management team. We have worked tirelessly to find and vet resources – memoir, novels, nonfiction, poetry, children’s books, and blogs – to provide those living with dementia a friendly place to find the support and knowledge they need. We believe that by sharing our stories we open a dialogue that not only reduces the stigma surrounding a dementia diagnosis, but enlightens others to the reality that “I made it through. You can too.”

Heartfelt thanks go to our Special Projects Editor Jay Artale, author of A Turbulent Mind: A Poetry Collection of a Mother’s Journey with Alzheimer’s, who donated countless hours to the design and formatting of this beautiful book.

This book would make a wonderful gift for a caregiver you may know who is in need of knowledge, support, and comfort. Please keep it in mind as you do your holiday shopping. It is currently available on Amazon in Kindle format. Purchase here. A paperback is in the works and should be published within the next week or two.

All proceeds from anthology sales will be used by AlzAuthors.com to maintain our site and promote our authors’ books.
Posted by Jean Lee No comments: