Meet Mary Cail, author of Alzheimer's: A Crash Course for Friends and Relatives (The All-Weather Friend) 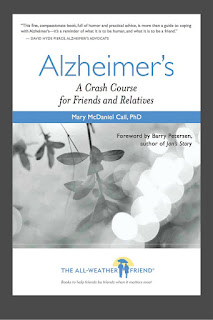 The All Weather Friend
by Mary Cail 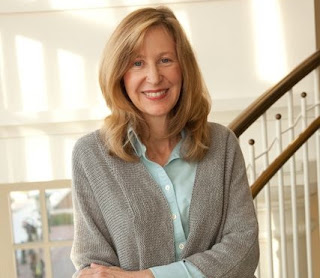 I’m a long-distance caregiver to my parents, who suffer from memory loss and multiple other health problems. I know every bump and bend in the 300 miles between their house and mine. I manage every part of their lives and the medically-trained staff they need, around the clock. I’m losing them in a very different way than I lost my husband.

I was not a caregiver to Wayne, not in the sense of someone who tends to a person with Alzheimer’s disease. My husband didn’t have dementia; he had a rare brain tumor, growing like a pointed tool into his brain stem. The nine-hour surgery to remove it seemed to remove, as well, his sense of self and place in the world.

No amount of care I could give made up for this sudden loss. He felt bewildered and scared. I wasn’t strong enough to hold him against the undertow of his dizziness, confusion, depression, insomnia, and failed confidence. But I tried.

He took his own life one February evening almost 14 years ago, assembling his means as I stood at our kitchen sink, chopping onions and tomatoes for the spaghetti we shared every Sunday night. When he didn’t come home, I left the pot on a cold stove and drove to the hospital where he worked as a physician—where he’d earned a reputation for his brilliant mind and his decency.

A short while later I was screaming, crouched on the linoleum tiles of a back hallway, holding my head in my hands, unable to stop the screams. He was in his office, dead.

I’d recently suffered a miscarriage, after five years of infertility treatments. In the wake of his death I felt as shattered as an empty glass dropped on a stone floor. Thus began my years of learning to live a different life.

Dreams of the family I had imagined—the school conferences, piano lessons, carpools and ponies—disintegrated like the white ash of a dying fire. My friends had no idea what to say. Some cried with me. One crawled into my bed the nights of that first terrible week and pressed her body against mine. Another said simply, “Come for dinner. Come everyday.”

The letters of sympathy, if unsure and rambling, were poignantly sincere. I couldn’t explain what I was feeling and needed from them; it was too huge and raw and incomprehensible—I still cannot talk or write easily about suicide.

I could only accept whatever they offered, whether it was an invitation to a funny play, a basketball game, or a tour of historic homes. I never allowed myself to say no; withdrawing, I knew, would prolong the grief. At night I cried until my eyes were almost swollen shut. I yelled in anger until the light fixtures rattled at what my husband had done.

I realized unless I could step outside myself and take care, in some way, of others, I would not survive. My life felt unendurable, tormented, disconnected. I could only reach out to people who were like me, I thought, and I looked for them in nursing homes.

The oldest were stooped and wrinkled, confined to chairs and beds. No one listened to the stories they could still tell. In my affinity with their pain and loneliness, I found a measure of comfort.

This experience led me to the younger group of caregivers and patients in early-stage dementia, many pulled, as I was, outside the social mainstream, grappling with a heartbreaking situation they never anticipated.

During those months and years, my dream of a family evolved slowly into a new dream, one of a concept: the All-Weather Friend, not the fair-weather friend we dread—the one who disappears or worse, who gossips, but the friend who’s there for us when we need her most and is empowered with an understanding of how best to help. Working with caregivers years before I became one myself, I wrote a book to help people outside this situation feel comfortable and be comforting: a book to help friends stay close. It isn’t as hard as people imagine, and small words and acts of kindness can make a big difference.

One morning during “those years,” as I call them now, I was in a country store near where I live. It’s a dark, cool place with a concrete floor, where chicken feed, handmade Christmas ornaments, eggs and mousetraps are within easy reach.

I had counted out the change for a package of crackers. As I turned to go, the lady behind the counter said, “I’m so sorry,” and her voice dropped off in disconcerted silence.

I looked into her face for a few seconds and saw nothing less than a deep well of compassion in her faded blue eyes. In the set of her features, I read the words she could not bring to her lips.

“For everything,” she finally finished. And it was enough.

Mary Cail, PhD, is the founder of The All-Weather Friend and author of Alzheimer's: A Crash Course for Friends and Relatives. Visit her website: www.marycail.com.