Meet Cathie Borrie, author of The Long Hello-Memory, My Mother, and Me 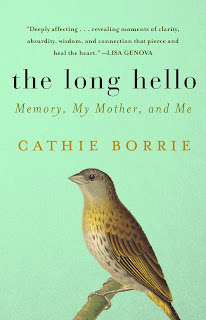 In an almost Zen-like poetic form, my mother revealed the changing landscape of her mind:

She expressed an imaginative, artistic perspective many times during her experience of living with Alzheimer’s, and her comments were so often full of insight, humor, and an astonishingly poetic sensibility that I started to tape our conversations. Between us, a wondrously poetic dialogue developed, which I further illuminated with childhood memories of our family and my struggle to maintain a life outside caregiving responsibilities.

I pursued the writing because I felt the world needed to hear her voice. Needed to know that people with Alzheimer’s are stigma-busters. She was not an empty shell, there was no long forgetting of her, she was not my long goodbye.

“What do you think about the sky?”
“Oh, I don’t know about the sky . . . I don’t really know about it.
But you have to wear gloves because it puts fingerprints on it--and you don’t want that.”

Although I had two publishers who were interested in presenting The Long Hello as a work of fiction,
the book took the form of a memoir--where would be the stigma-busting if it was a fictional account? It was her magical voice, weaving throughout the book, which I loved so dearly and wanted to share with others. Amidst many unhappy moments, as there are with any neurological chronic disease, she shone a much needed light on the experience with a hopeful perspective.

The feedback on the book from noted writers and Alzheimer's experts like Maya Angelou and Lisa Genova has been rewarding, and I have been heart warmed by responses from the dementia community who welcome the verbatim voice of someone living with Alzheimer’s. The lyrical, poetic form of the work seems to appeal to people looking for something other than a “how-to” book. I think our story “shows” rather than “tells.”