Meet Kathleen Wheeler, author of Brought to Our Senses 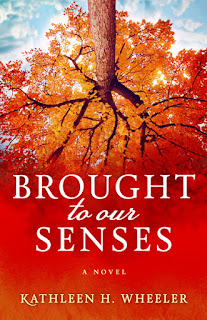 Why choose Alzheimer’s as the focus of my new family saga novel Brought To Our Senses?

It’s a fair question. After all, Alzheimer’s is argued to be the disease feared most of all. The mind-robbing illness has a bad reputation and a stigma stifling discussion in mixed company. So why exactly would I tackle such a difficult subject, one so many avoid altogether or shrug off as hopeless?

The answer is simple: it’s personal.

Alzheimer’s has forever changed my life, an existence now measured in two distinct periods of time: BA and AA. “Before Alzheimer’s” was my life until 1996 when dementia came calling for my mother with a vengeance. She was only 62, and I was 30 with a newborn daughter at home. “After Alzheimer’s” is the last twenty years I’ve spent raising two children and dealing with my mother’s diagnosis, decline, and death from this monster.

My mother passed away in 2009 but dementia lingers like the familiar nightmare waking me in a cold sweat. I’ve never faced anything more devastating. Like it or not, Alzheimer’s has wormed its way into my life thanks to genetics. I am susceptible, as are my siblings and children, and this reality drives my waking hours and efforts.

Because dementia is now a part of my past and future, I wrote a fictional story about Alzheimer’s to raise awareness about the disease and to rally families for the fight. Brought To Our Senses stresses the importance of family relationships and the healing power of forgiveness. When it comes to dementia, it’s crucial for family members to get along and support each other through years of difficult decisions and heartbreaking predicaments. Most modern families harbor grievances of some sort, but these issues pale in comparison to life and death matters like aging parents and Alzheimer’s.

Families need to put aside their petty differences to deal with a disease as emotionally, physically, and financially draining as Alzheimer’s. If it takes a village to raise a child, it takes a metropolis to see someone through Alzheimer’s. A strong and united family is key to living through an Alzheimer’s diagnosis and decline, and Brought To Our Senses proves that point.

Response to Brought To Our Senses

The feedback I’ve received about my story has been overwhelmingly positive. Readers struggling with dementia have told me the story has convinced them that they are doing the right things on behalf of their loved ones. Some have commented they had no idea how stressful and complicated the illness can be and the thorny issues that need to be addressed. Others have confessed the story persuaded them to mend broken relationships with siblings. These kinds of responses are truly gratifying.

I hope my novel continues to inspire those touched by dementia and unite families for years to come. I’m never going back to the time “Before Alzheimer’s” and plan to look ahead and work toward a world without Alzheimer’s instead through awareness, compassion, and advocacy. It’s the ultimate goal for all of us who have lost a loved one to this disease.

Kathleen H. Wheeler, author of the debut novel Brought To Our Senses, writes stories that sing because she cannot. A graduate of the University of Illinois, she has wordsmithed as a marketing communications professional for ad agencies and corporations since Nike first coined the slogan “Just Do It.” Wheeler is a music enthusiast and lifelong fan of a British musician known by a one-syllable nickname. Along with her husband and two children, she calls the Land of Lincoln home. Learn more at www.AuthorKathleenHWheeler.com.

Elizabeth Miller discovers that aging parents are a family affair when her divorced mother receives a deadly diagnosis and becomes a volatile patient. Forced to work with siblings at odds through the crisis, she learns when all is lost, family begs to be found.