Karen Kaplan is Back with a Sci-Fi Dementia Novel

By Karen B. Kaplan 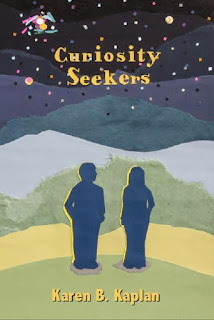 Perhaps it is not often that you come across science fiction that is (1) gentle and not full of weapons and nasty robots, and (2) includes a character who is one of the first with dementia to get cured of the disease. There are so many other aspects of reality to ponder, such as how robots might help or hinder grievers, it is a wonder that science fiction writers have not provided more material on such things. (Have you ever noticed that the Star Trek crew does not include a spiritual counselor?) As a healthcare chaplain, I have been curious about what it might be like to be cured of Alzheimer’s or other forms of dementia. Virginia Boyden, financial planner of the main characters, is one of those first lucky persons to be a “dementia returnee.” Virginia shares what it was like to get dementia, as well as what happened on the return trip. A temporary detour to complete health does arise, but Virginia figures out how to handle it.
Perhaps reading about dementia in upbeat fantasy might help us indulge in the comfort and hope that such fantasy can provide. It offers a different perspective, especially when the main characters Gomer and Muriel Ackerman try to grapple first with their financial planner’s decline, and then the issues that arise as she recovers. Here is an excerpt:
“Even a recluse knows that around the year 2056 patients with dementia had become as obsolete as doorknobs. But only a precious few individuals are aware of how the initial returnees from this malady reassembled their minds…
“An interviewer asked Virginia about the first half of her journey, when she was becoming more and more demented. She reluctantly described this frightening time: ‘I felt like I was a wall, and all the pictures on it and then even the wallpaper fell off, and then the wall itself wore down down down to the insulating material within it, and even that started coming apart. And then all the stuff out there coming at me such as sounds and being moved around and drinking coffee just passed through that material as it became softer and softer, and thinner and thinner. It was like everything was passing through or around me and I was not sending anything back out… But make no mistake: now I’m a solid colorful wall, decorated with photos and designs, and with great big bay windows that open to a field of newly blooming sunflowers waving at me.’”
About the Author

Karen B. Kaplan has an unusual background for a science fiction writer: she's a hospice chaplain and instructor of English as a Second Language. She has always wanted to write sci-fi with a compassionate touch, rather than portray the wars writ large and nasty robots found in dystopian scenarios. In her most recent book, Curiosity Seekers, Kaplan cooks up a blend of irony and an exploration of spiritual values such as privacy and the need to be heard. She enjoys surprising and entertaining readers by finding humor in the most unexpected places. In one of these interrelated stories, a grieving man tries to circumvent his grief by ordering up a robot that looks and acts like his wife. But complications ensue when her sexuality as well as other traits differ from the “original” mate. While serving hospices in New Jersey and New York for seven years, Kaplan visited over 4,000 patients and their families from all walks of life. That is when she wrote her first book, Encountering The Edge: What People Told Me Before They Died. Even in the context of hospice Kaplan is always alert to quirky anecdotes. “I always have an eye out for it,” she says. “I remember a funeral where the deceased’s niece looked at the grave and said, ‘Auntie, you sure have been fussy about apartments. But you’d better be satisfied with this one, because it’s gonna be your very last.’” When she was ordained in 1992, Kaplan became one of the first 200 female rabbis worldwide and earned board certification as a healthcare chaplain in 2007.
Follow Karen. B. Kaplan
Blog: Offbeat Compassion
Twitter: @chaplainkkaplan
AlzAuthors
Purchase Curiosity Seekers on Amazon