Meet Karenna Wright, Author of "The Grapes of Dementia" 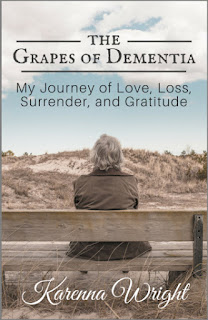 It used to be that nine months or so after a traditional wedding, couples would announce they were pregnant. Not with Alan and me.

Nine months after we were married, and before our first honeymoon year was over, we were instead adjusting to the symptoms of Alan’s newly diagnosed dementia.

He passed less than five years after that diagnosis. He was 67 years old, I was 59.

Since then, I've been writing about our lives with early onset dementia, as well as my grief process.

I'd been writing all my life, had published in journals and magazines, so the thought of writing our story came naturally to me. And really, it wasn't an idea at all. It was something I did as instinctively as a mother loves her child.

At first I randomly jotted down brief notes, a shorthand to capture all my memories.

Several years later, Alan fell at home, then had a bad reaction to an anti-anxiety drug given him in the hospital.

He suffered disorienting, disturbing hallucinations and excruciatingly painful muscle spasms. Under the influence of the drug, he clawed at me, grabbed me, pulled me close to him, and fought me off—all at the same time. He squeezed my hand so tight I thought it would break.

When I got home at eleven o'clock that night, physically beat up and emotionally broken, I wrote down everything that happened that day.

My writing was raw, uncensored. I wrote for my own mental health. I needed to share my agony, to find a glimmer of hope in it, then offer it to others.

I anticipated the acceleration of Alan's dementia—memory loss, confusion, personality changes. But I didn't expect the profundity in it. I didn't expect to frolic in the deepest regions of love, to see the joy within the sorrow, to cry and laugh at the same time.

I didn't expect to discover that the kernel of hope and truth dwells in moments of seeming despair.

Placing your entire presence and awareness into caregiving (or any other activity) heightens the senses beyond the knowledge or experience of what we'd otherwise observe. It lifts us above what we think is happening, gives us a bird's eye view of the situation, and reveals a way for us to respond that transcends our personal normal.

And that is my message for caregivers and their loved ones.

The high road shows us how to love someone and what loving and serving another looks like—anyone, not necessarily someone who is ill. Anyone. This is how you treat another human.

Readers have said I've offered a glimpse into the hidden nature deeply buried in illness, trauma, and our perceived fears of loss, that my writing touches the heart, soul, and funny bone.

They've commented on the joy present even in the turn of heartbreaking events, the amazing strength we can find to just keep going.

They've realized that simply being there is more important than anything else.

Karenna Wright is retired from a global telecommunications corporation, where she managed one of the company's technical libraries and got to buy lots of cool books. She holds a BA in Communications, with an emphasis in Literary Journalism and a minor in Women's Studies, from the University of Denver. Her work has appeared in numerous literary magazines and local publications. She also writes a column about her life as a caregiver for Senior News in Humboldt County, California. Her first book, The Grapes of Dementia: My Journey of Love, Loss, Surrender, and Gratitude, highlights her experiences and insights as a caregiver to her late husband Alan, who was diagnosed with dementia shortly after they were married. Karenna's second book is in the planning stages and will offer practical guidance to caregivers.

Karenna is wild about playing her djembe drum, which she discovered while a caregiver. The therapy and health benefits inherent in the drum contributed to her ability to cope with taking care of and losing her husband. She has enjoyed living on the north coast of California the past two and a half years and dipping her toes in the Pacific Ocean while gazing upon the giant redwoods. However, Karenna and her partner are in the process of selling their home and moving back to their families and friends in Colorado, where they have both lived for 35 years. Her brief sabbatical by the ocean did wonders toward healing her heart.

The Grapes of Dementia on Amazon
Posted by Jean Lee