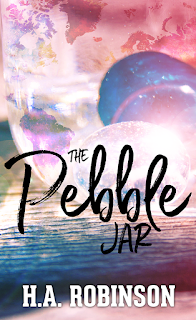 When I sat down to write The Pebble Jar around this time last year, I had no idea of the personal journey the book would take me on. In March of 2016, my little Nana passed away at the age of ninety-one after a long and painful battle with Alzheimer’s. By the time she fell asleep for the last time, we had almost completely lost the essence of who she had once been, leaving us with a shell of the person we loved.

As a child, I remember her being this amazing force of life, so vibrant and always happy. She was the life and soul of every party she went to, and I can still hear the infectious sound of her laughter even though it’s been so long since any of us really heard it.

In a way that none of my other books have, this one tore me apart and sewed me back together as I wrote.

At its heart, it is a love story about two teenagers, Abigail Costa and Elliot Peterson, who have been best friends for as long as they can remember. When the teenage years start to come thick and fast, their dynamic changes and our old friends, the hormones, begin to take over. While Abbi is dealing with the usual teenage angst that everybody goes through, though, she also finds herself struggling to cope with the changes she sees in her beloved grandmother, Nonna. As Alzheimer’s slowly but surely steals away the person she loves most in the world, she is left feeling alone and frightened, unable to truly cope with what’s happening in front of her eyes.

Alzheimer’s isn’t a glamourous Hollywood disease. It isn’t something that receives a great deal of attention in the media, yet it has to be one of the most heartbreaking things to watch a loved one go through. In writing The Pebble Jar, I really wanted to communicate that feeling of isolation you experience while watching somebody you loved being torn away from you. Of knowing that the person you once knew is effectively gone, even though they’re still there in front of you. That gut-wrenching pain of having them look at you as though you’re a stranger when they’ve known you your entire life.

The response I’ve received since releasing the book has absolutely blown me away. I’ve had messages from people I’ve never spoken to before telling me how deeply the book resonated with them. People who have been through similar experiences have contacted me to say thank you. I’ve always believed in the power of literature to support people through hard times and make them feel less alone, but I never in a million years expected my story to be one of them. I’m over the moon that even one person has found the book to be a comfort, and hope it can continue to support those who need to feel like somebody understands and maybe help start conversations about Alzheimer’s.