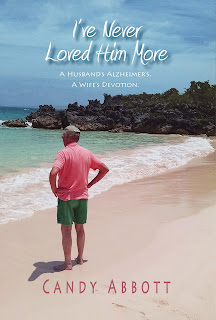 A Husband’s Alzheimer’s, A Wife’s Devotion

“Mom,” my daughter Kim said, “You know you’re going to have to write a book about how you’re dealing with Dad.”

I recoiled at the thought. It was all I could do to get through each day of unknowns and added responsibilities. “No, hon. I have to live this before I can write about it. I have no energy to think about ministering to others right now. Maybe after it’s all over—maybe then, I could think about writing—but not while I’m dealing with all this raw emotion. I’m still finding my way.”

A couple of weeks later, I shared my struggles as an Alzheimer’s caregiver with Delmarva Christian Writers’ Fellowship. During the coffee break, Claire Smith touched my arm and looked deep into my eyes. “Candy, you need to write a book about this, you know.”

I flinched and felt my face flush. “That’s what Kim said, but I don’t think so. Not for years, anyway. I have to get through this first.”

She tilted her head and said with a knowing look. “We’ll see.”

I wanted to smack her encouraging prophetic face. Instead, I smiled sweetly. But a seed had taken root. I felt it in the core of my soul.

And then came the phone conversation with my writing mentor, Nancy Rue.

“Everywhere I turn, people are telling me that I need to write about this, and I don’t have the time, energy, or inclination.”

“Well,” she said, “don’t think of it in terms of writing a book. Just try capturing some scenes now and then that seem significant. I think it could be therapeutic for you. No pressure, no goals, just get some of these things out of your head and heart and onto paper where you can look at them. It’ll give you a little bit of control, and it won’t be hard. Just capture some scenes.”

Nancy was on target. Right from the beginning, my manuscript began teaching me things about myself as I recorded my raw emotions and the mysterious changes taking place in Drew. I shared parts of the manuscript with Sara Lewis, and she said, “Candy, people need this NOW. You have to publish this as soon as possible.”

And so I did. Drew is still in the moderate phase of Alzheimer’s, and I have to hide all evidence of the book as he thinks he’s perfectly fine. But I have peace that I’m doing the right thing by releasing our story while he’s still living.

One woman said the first few pages brought healing of unresolved grief over her grandfather. Another said she overcame guilt over how she had cared for her husband until she recognized herself as a Proverbs 31 Woman. A seven-year-old granddaughter with severe anxiety reads the book with her grandmother every night. “She may not understand everything,” Sharon said, “but she feels the love.”

What pleases me most is that people see hope between the pages. I suspect my hardest days are yet ahead, and I’m still writing. But this I know: Alzheimer’s doesn’t have to break you. It can make you trust God more and teach you to appreciate living in the moment. It’s all about finding a depth of love you didn’t know you had in you.