Meet Lauren Dykovitz, author of “Learning to Weather the Storm: A Story of Life, Love, and Alzheimer’s” 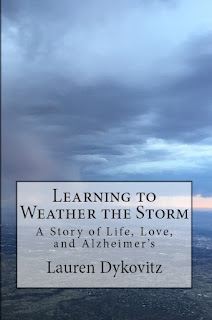 When I was just 25 years old, my whole world was turned upside down. My mom, who was 62 at the time, was diagnosed with Early Onset Alzheimer’s Disease. I remember that phone call like it was yesterday, although it has been over seven years now. I immediately felt completely alone and utterly lost. I didn’t know anyone my age who had a parent with Alzheimer’s. I had heard a few people talk about a grandparent who had died of the disease, but never a parent. I felt like I had nowhere to turn and no one to confide in, so I didn’t tell anyone about it. I had just gotten engaged that same month and spent the next year of my life planning my wedding without my mom, while grieving small losses of her along the way. And yet, no one knew that I was suffering. Depressed, helpless, hopeless, and lost, somehow, I got through that very dark time.

At age 28, I made the decision to quit my full-time job and became a part-time caregiver for my mom. My experience as a caregiver taught me many lessons of life, love, and Alzheimer’s. I eventually came to accept my mom’s illness and began looking at it in a whole new way. Thinking back on the beginning, I remembered those feelings of loneliness and isolation all too well. I wondered how many other younger people were dealing with a parent’s Alzheimer’s and felt like I once did. I wanted to help them. I decided to share my story with others by writing a blog. The encouragement and praise of my readers led me to write my book, “Learning to Weather the Storm: A Story of Life, Love, and Alzheimer’s.”

It was very important to me that my book be an honest account of my experience. Although Alzheimer’s is not my whole life, it is a very large part of it and has had a great impact on many of my life choices. I wanted to convey the struggles of a young caregiver dealing with her mom’s illness, while still living her own life. I didn’t want to compromise any part of my story or myself. I wanted it to be authentically me. I also wanted my book to be relatable. I wanted readers to feel like they were talking to an old friend. I’m happy to say that these are the exact things readers have said about my book. I’ve been told that it is real and raw. Readers of all ages have said that my book is sad at times, but funny at others, and that they found it to be inspirational. One of my favorite compliments from a reader is that you can see me grow as a person throughout the book.

One of the main reasons I decided to share my story was that I wanted to help people. I wanted to be who I needed when my mom was first diagnosed with Alzheimer’s. Shortly after my book was released, I began receiving messages from total strangers who had read my book. They thanked me for writing it. They said that they felt like they could have written it themselves and that it was as if I was telling their story. Complete strangers say that they feel like they know me after having read my book, as if I was talking to them through the pages. They have thanked me for putting their feelings into words and for not sugarcoating anything about Alzheimer’s.

My book has allowed me to become the voice for those who have not yet found their own. I have become someone who younger people can turn to when their parent receives an Alzheimer’s diagnosis. If they don’t know anyone their age who has ever been in their shoes, then at least they have me and my words. I can proudly say that I am exactly who I needed when I was younger and first learned of my mom’s Alzheimer’s. I will continue sharing my story until everyone realizes that Alzheimer’s is not an old person’s disease. It doesn’t need to be whispered about behind closed doors. It isn’t something to be ashamed of. People need to feel like they can talk about it openly. The more we all share our journeys, the less alone we will feel.

Lauren Dykovitz lives in Delaware with her husband and her two black labs. Her mom, Jerie, is still living with Alzheimer’s disease. She is now 69-years-old.

“Learning to Weather the Storm” is Lauren’s first book. She hopes that it will be the first of many, as she plans to continue sharing her story and all of the lessons she learns along the way. Lauren also writes about her experiences on her blog, “Life, Love, and Alzheimer’s.” She has been a contributing writer for several other Alzheimer’s blogs and websites, as well. Please visit lifeloveandalzheimers.com to learn more about Lauren’s journey.