Welcome back, Joy Johnston, author of “The Reluctant Caregiver” 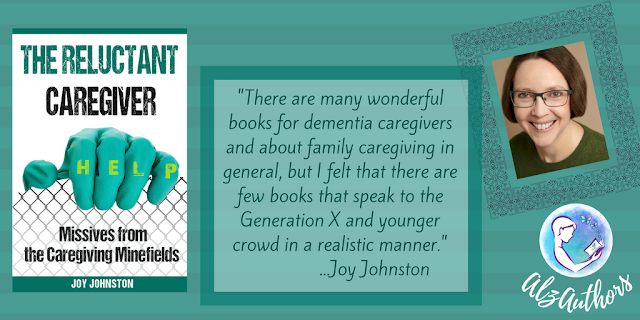 Not everyone is born a natural caregiver.

Unlike some caregivers who can draw upon their experience as a parent or time spent taking care of siblings when they were younger, I had no such reservoir of caregiving knowledge when my parents fell ill. An only child who lived 1,300 miles away from my parents, my father began showing signs of dementia while I was in my mid-thirties. Assuming the role of long-distance caregiver, I helped my mother by paying bills, sending supplies, and researching care options.

It was not until six months after my father’s death, when my mother suddenly fell ill and was diagnosed with colon cancer, that I became a primary caregiver. I was woefully unprepared and frankly, reluctant to step into the role. My mother required emergency surgery and faced a lengthy recovery. I ended up quitting my job and temporarily moving to New Mexico to care for her. What followed was a crash course in caregiving, with all the ups and downs that comes with the territory, like the most terrifying roller coaster in the world. (I’ve always hated roller coasters.)

For the next several months, I served as my mother’s caregiver and patient advocate. My mother suffered complications and required rehab in a skilled nursing facility. I filled out copious amounts of paperwork, ensured my mother was getting proper care, and made modifications to her home for her eventual return. Caregiving is physically, mentally, and emotionally the most challenging job I’ve ever had, and it gave me a whole new appreciation for caregivers.

I began writing essays about caregiving when my father was in the memory care center during the last year of his life, and continued writing through my mother’s battle with cancer. The essay writing was both therapeutic and empowering. I submitted some of these essays to online outlets and found they generated a passionate response. Fellow caregivers seemed to appreciate my nontraditional perspective and opened up about their own difficult caregiving experiences. This encouraged me to release The Reluctant Caregiver, a collection of these personal essays. My brutally honest writing style contains language that some may find objectionable, but the essays also depict the love, humor, and heartbreak that accompanies the caregiving journey.

There are many wonderful books for dementia caregivers and about family caregiving in general, but I felt that there are few books that speak to the Generation X and younger crowd in a realistic manner. For those familiar with the book, Sh*tty Mom: The Parenting Guide for the Rest of Us, I wanted to capture a similar tone, but for caregivers. I also wanted to be inclusive of those who may have reservations about caring for a family member and that it’s okay to have feelings of reluctance, fear, and resentment. If I survived and even became pretty darn good at caregiving, then you can too!

The Reluctant Caregiver on Amazon

Joy Johnston is an experienced digital journalist who is a National Content Editor for Cox Media Group, where she specializes in creating viral content that drives web traffic and social engagement.

Joy received the 2015 Rick Bragg Prize for Nonfiction from the Atlanta Writers Club. Her work has been published in Chicken Soup for the Soul and other anthologies. Joy also works to raise awareness of Alzheimer’s and caregiving through her blog, The Memories Project, and through essays that have appeared in digital and print formats. The Reluctant Caregiver is her first book.