Meet Vicki Tapia, AlzAuthors Admin and Author of “Somebody Stole My Iron” 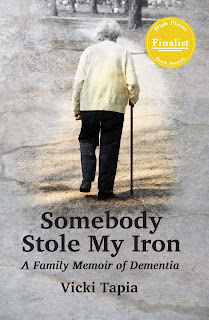 In 2004, both my parents were diagnosed with dementia, Dad with Parkinson’s-related dementia and Mom with moderate Alzheimer’s disease. Even though symptoms had become increasingly obvious by the time of diagnosis, hearing the words dementia and Alzheimer’s disease really knocked the wind out of my sails. We now faced the stark reality of terminal diagnoses.

Trained as a teacher and looking for answers, I sought information to describe what to expect and how to best navigate what lay ahead. I searched for books written from the family caregiver’s perspective, but found few, and none that actually proved very helpful. I could cry on my husband’s shoulder or unload my anxiety on a close friend only so often. In a deviation from my usual handwritten journals, I began tapping away at my computer keyboard on a near daily basis.

When I began writing about dementia, it was merely a vehicle to help me cope with family caregiving. My diary became the place I sought solace at the end of a long day. It didn’t talk back or demand anything of me. However, after a year or so of writing, an awareness slowly took shape inside my brain and I realized I was in the midst of writing a book. I began to recall memories of Mom’s dementia-like behavior from years previous and it amazed me how many recollections remained vivid in my mind. Scene after scene from both the past and present came alive on the computer screen.

I continued to write and refine my memoir over the next several years. All told, nine years passed from the time I started to write and publication of Somebody Stole My Iron. This includes ignoring the manuscript for nearly three years during a fierce internal battle that raged within me between sharing the story or protecting our family’s privacy.

During that time, parents of three different friends received an Alzheimer’s diagnosis, so I offered each of these friends my manuscript. All gave positive feedback and encouraged me to seek publication. I finally realized that despite my trepidation, someone needed to speak up and be the written voice I couldn’t find during my parent’s journey.

Publication has brought me bountiful blessings far beyond sharing our family’s story with others. I have been fortunate to have had the opportunity to speak about dementia awareness in many different venues in my city and the surrounding area. I have encountered readers from around the world who have offered feedback that my shared lessons have also been helpful for them. Through social media, I have become friends with authors of other books about dementia. In 2015, Jean Lee from Ohio and Marianne Sciucco from New York joined together with me to cross-promote our books. And from this collaboration sprung AlzAuthors. There is no way I could have predicted that writing a diary about my struggles to cope with my parents’ dementia would blossom into friendships across the globe and lead me on a mission to educate and provide resources for others affected in some way by dementia. I truly believe all the AlzAuthors are part of a wave that will help to end the stigma associated with this devastating disease. 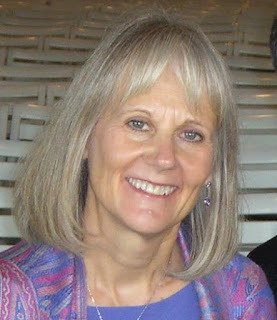 After teaching somewhere around 10,000 mother/baby pairs the art of breastfeeding, Vicki found her energies redirected to the other end of life, after both parents were diagnosed with dementia. A diary written to help her cope with caregiving morphed into Somebody Stole My Iron: A Family Memoir of Dementia. This memoir was a finalist in the 2015 High Plains Book Awards.

Vicki’s second book, Maggie: A Journey of Love, Loss and Survival, is a tribute to the intrepid life of her great-grandmother, written in remembrance and recognition of a time when women had few rights. In a different time, Maggie might have been part of the #MeToo movement.

A co-founder of AlzAuthors, Vicki wishes every dementia caregiver had access to the AlzAuthors Bookstore and looks forward to the day when Alzheimer’s is no more. When not busy writing, you are apt this native Montanan out walking her dog or off on an adventure with her husband on their tandem bicycle.