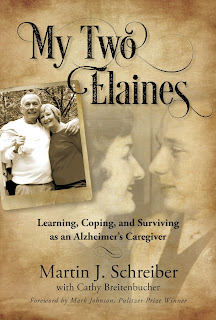 If there’s one thing worse than Alzheimer’s, it’s ignorance of the disease.

Count me among those who were ignorant. Over the past decade, I’ve learned more about Alzheimer’s than I ever thought was possible. To be sure, I’m no expert on the science of the brain. But I know what Alzheimer’s did to my heart – it broke it when it struck my wife Elaine some 14 years ago.

I’m striking back against Alzheimer’s by speaking out, to wipe out some of that ignorance of the disease. My book, My Two Elaines: Learning, Coping, and Surviving as an Alzheimer’s Caregiver, came out in November 2016. Loved ones of those with dementia say it resonates with them. I’ve done more than 150 presentations in four states, with lots more coming up. I’m energized by these audiences.

Following a recent event in Wisconsin, a man who is a caregiver for his wife with dementia approached. He wanted to thank me for writing the book.

“It turned my life around,” he told me, tears welling in his eyes – and soon in mine, too. “You saved me.”

Comments like those are beyond what I expected when I wrote My Two Elaines. My goal was to help caregivers learn, cope and survive. I felt compelled to share my own experiences so that other caregivers would have an easier time.

My book grew out of a short magazine article about me and Elaine that was published in a Milwaukee-area magazine in July 2014. Up to that time, only my family and closest friends even knew I was an Alzheimer’s caregiver. After reading the article, they urged me to use my name recognition as a former governor to draw attention to the plight of these heroes.

Fast forward to the fall of 2015, after Elaine moved to memory care assisted living. My quieter time at home was allowing me to reflect on the now-completed experience of caregiving at home, and to ask myself “what’s next?” I set to work, pouring out my thoughts on paper and on my laptop – whichever I had at my fingertips when inspiration struck.

In just two months, I had a first draft of a book, and I began to share it with not only my inner circle, but also with friends I’d lost contact with due to my caregiving responsibilities. They told me, “we had no idea what you were going through.” That made me think, if that was happening to me, surely there must be many other caregivers whose work was going unnoticed, unacknowledged and unsupported. That spurred me to get my book published.

The first shipment of books (5,000!) had barely landed in my garage in November 2016, and right away I hit the road. The response was so great I had to order more books (10,000!) in early 2017. When it was time to order once again, I took a step back and knew I needed to include some of the “conversations from the road.” I also realized that while I had told my story and Elaine’s (by way of her journal entries), I hadn’t given our kids the chance to voice their thoughts. So now, all four of them have added their perspectives in the Epilogue.

I sincerely hope that my book is helping others who are experiencing isolation, grief and depression due to caregiving. We cannot give up. We have to educate others. 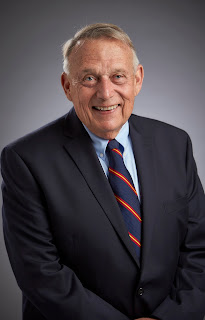 My Two Elaines: Learning, Coping, and Surviving as an Alzheimer’s Caregiver is available on Amazon. To request autographed copies, use the order form at www.mytwoelaines.com.