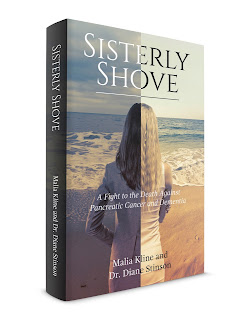 When our mama was diagnosed with infiltrating pancreatic cancer and given three-to-six months to live, she was the sole caregiver for our 87-year-old father “Papa,” who was in the early stages of dementia. Over the next 13 years, my sister Diane, a pathologist, and I shared care of them from opposite coasts and opposing viewpoints, often engaging in hand-to-heart combat over what constitutes quality of life. Sisterly love turned to Sisterly Shove in the book we co-authored.

After hearing the news that Mama had pancreatic cancer, Diane proclaimed her “a goner.” But after she became dissatisfied with both the home care I arranged and the health care system in our hometown in North Carolina, Diane took Mama against doctor’s orders to live in her home in a California beach town. She quickly discovered that the wild card of having someone like Papa with dementia in the mix made cancer care and practicing medicine impossible for her.

Papa ping-ponged back to me in North Carolina and lived in a memory care facility I loved for five years.But after he broke both hips, Diane eldernapped him from the facility,quit practicing medicine, and doctored him by herself 24/7 for more than seven years at her home in California.

The story my sister and I tell in “Sisterly Shove” reflects a new kind of sibling rivalry among baby boomers: Which sister, or sometimes brother, is best willing and financially able to care for and make life-or-death decisions for elderly parents, especially in light of their own obligations to young children? Is it possible to share care among siblings, especially in a strong-willed and highly opinionated family like ours with a both a sister and brother who are doctors calling the shots long distance?

The Alzheimer’s Association says that 1 in 3 seniors now dies with Alzheimer’s or another dementia. In the case of Papa and his siblings, dementia snatched the memories and daily lives of 4 out of 5 of them. Since we are part of an extended family predisposed to living long lives, most of our cousins have also experienced Sisterly Shove. Since the book came out, we’ve learned that three once-close female cousins who all work in health care and battled over care of their mom have now been estranged for years.

We’ve also found that many of our readers have experienced similarly heart-wrenching family caregiving battles and can totally relate. Family relationships have clearly become an unintended casualty of the Alzheimer’s and dementia epidemic. We are working to share our story, not only in our book, but also in person at conferences and within caregiver support groups in order to help siblings work together in a spirit of compromise.

My co-author Diane went to medical school in the days when health care was a fee-for- service world. She believes that if we don’t support research and change our approaches to eldercare under the new value-based medicine model, we will pit one generation against the next and compromise our ability to be competitive in a global economy. That’s one perspective and hope for our society that the two of us certainly will not fight about.

Malia Kline, the younger sister in “Sisterly Shove” is a copywriter who studied journalism at The University of North Carolina at Chapel Hill and was formerly a writer/producer at a CBS-affiliate TV station. She was also the scriptwriter on videos in the Duke Family Series. One of them, It’s Potty Time, was named “KidVid of the Year” by Roger Ebert and became available in nearly 700 libraries worldwide. Malia now owns her own copywriting business and shares her word-obsessed perspectives in MaliaMania, a comedic grammar blog. She lives in Charlotte, N.C. with her husband Steve and has one daughter who has followed in her sister’s footsteps as an M.D., recently starting her pediatric residency.