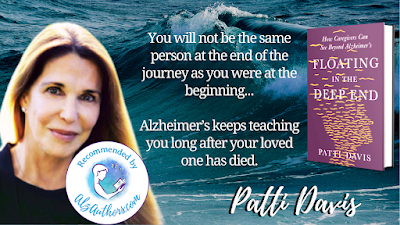 This week AlzAuthors features a beautifully heartfelt memoir by Patti Davis, Floating in the Deep End, written from her experience with her father, President Ronald Reagan, as he declined from Alzheimer's at the end of his life.

On a blue-sky November day in 1994 I walked into Central Park, which was near my apartment in New York. My mother had just called to tell me that my father was going to release a letter disclosing to the world that he had Alzheimer’s. I had only learned of the diagnosis days earlier. Days before that I had walked in the park weighed down by despair and hopelessness; everything in my life was going wrong, I was completely alone, tired down to my soul, and I wasn’t sure I wanted to go on living. Then I learned that my father had Alzheimer’s, a disease that everyone was aware of but no one was talking about. That could have been the thing that pushed me over the edge, but instead it pulled me back from the edge. It gave me something bigger than myself to focus on. I wanted to show up for this journey, whatever it was going to be. I wanted to be there for my father.