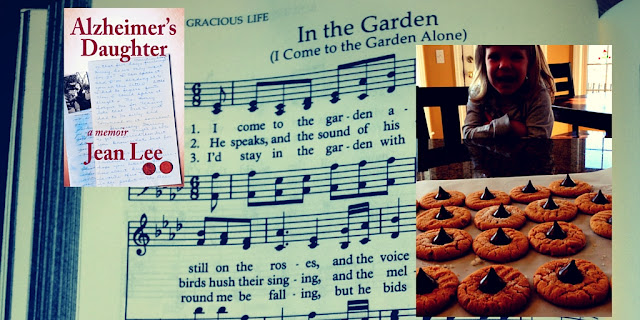 As I think back on last week I'm writing about three treasures I hope I’ll remember forever.

First rambling: I had the opportunity babysit for my almost four-year-old granddaughter, my daughter’s daughter. We baked Christmas cookies—peanut butter kiss cookies. As we rolled the dough into balls, forked the crisscrosses, sprinkled sugar and plopped the kisses on top, she jabbered non-stop about starting a bakery with her three-year-old cousin, my son’s daughter. My daughter and my daughter-in-law are busy ladies, there is little time to bake with children because there are meals to prepare, laundry to wash and fold, bathrooms to clean, vacuuming to complete, and much more. But when Granny comes I’m unencumbered by these tasks and they let me do the fun stuff. As we baked my mind wandered to the many times my mom spent in the kitchen with my son and daughter teaching them details that were later repeated to me in the kitchen, “Mommy, Grandma says to scrape the extra flour off the top of the cup with a knife.” Mom taught my children these small lessons, but many larger life lessons by spending time with them. I hope I’m forging the same bond.

Second rambling: I was awed and honored to be published in a blog interview with Hélène Tragos Stelian, Next Act for Women. When Hélène and I worked on this article some months ago I described how Alzheimer’s Daughter grew out of the pain resulting from the ravaging of the disease upon both of my parents. But when Hélène’s article was published last week, it struck me in a very different, impactful way. Her article created a liberating story from the pain. It created healing in me and made me realize that positive outcomes grow from negative situations. The next act in our lives can be the goodness that sprouts from pain.

Third rambling: On Tuesday night I was invited by a friend and fellow writer to speak at her church. Public speaking terrifies me. So I spent the afternoon trying to calm my racing pulse. However, when I arrived at the church, I was welcomed as though into someone’s home. About 15 of us spent the evening talking like old friends over coffee. We sang my mom’s favorite hymn, “I Come to the Garden Alone.” I read excerpts from Alzheimer’s Daughter, invoking many questions and comments from this group comprised of people like me, taking care of a parent, as well as those who were taking care of a husband or wife. That day would have been my dad’s 95th birthday, so I closed by reading my account of his last birthday before his death, his 91st.

I visited Dad on his 91st birthday in December of 2010. When I entered the unit a couple people were moaning. Someone had just fallen. Staff were assessing for possible broken bones. A gurney was being wheeled in to transport the victim to the emergency room. There was a faint smell of urine.
I spoke to no one but scurried back to Dad’s room. My heart always raced as I approached his door because I never knew how I’d find him. Sometimes he was in bed­­ fully dressed but sleeping, looking dead. Other times I found him stumbling around the room looking for a shoe, a belt or eye-glasses. Sometimes the room smelled all right, other times there was a strong odor of a diaper needing changing.
That evening he was neatly dressed, wearing a dark-red, knit shirt, tan pants and his WWII Army Veteran cap atop his head. He napped in a chair facing the window even though it was dark outside. A sitcom laughed from the TV in the background. He heard me enter, awoke, turned the plaid swivel chair toward me and said, while putting his right hand out to shake mine, “Hello, I’m Ed Church.”
I grasped his hand saying, “I know who you are, because you’re my dad and I’m your daughter, Rosie.”
I delivered two birthday cards, one from me and one from Annette. As I read the cards he marveled at the beauty of the poetry smiling so brightly his eyes squinted. He thanked me.
We talked for a little while. During our conversation he used the word ‘wife.’ I told him Ibby and his loved ones formed a cloud of angels waiting for him in heaven. Smiling, he said, “I’ll be there soon.” He gazed out the dark window, waving his hand, as if waving to Mom sitting on a cloud. I wished he could will himself to go.
When we left his room and made our way to the dining room, he announced, “I’m ninety-one!”
Annette had sent a bunch of colorful balloons that were placed in the middle of the table Dad shared with three other people. I sat on the seat of Dad’s walker at the corner of the table. The gravity-defying balloons amazed Dad and his tablemates. They took turns reaching for the balloons trying to hold them down, giggling as the orbs flew like birds. During the meal, Dad tried at least four times to feed me, putting his fork filled with food close to my lips. I thanked him but told him my supper was waiting for me at home.
I’d ordered a birthday cake. At the end of supper, less than an hour after a resident had been taken to the hospital by ambulance, everyone sang “Happy Birthday,” and aides cut and served the cake. Dad kept saying, “I’m so happy. I’ve been so lucky.” With tears in his eyes, he said, “I don’t deserve all the good things I’ve had in life.”
His words haunted me because I knew he deserved much more. He complimented the staff many times. He said, “They take good care of me here.” There was no doubt he was well cared for but it was sad to think of my father at the end of his life, locked away twenty-four hours a day, with 15 to 20 people, all of them losing their minds.
Even though he was surrounded by negativity he seemed to block out the pessimism. He was tolerant of others and tried to be pleasant, lifting them out of their funk. He lived within the confines of his circumstance and continued to exude cheerfulness.

What ties these ramblings together? They are positive points in my life, making me reflect upon the love of family. They all help me heal. I don’t mourn my parents’ passing. They lived long healthy lives and died at age 89 and 91. Their passing was a near decade of good-byes. I mourn the fact that I had to make decisions for them, taking away their independence, decisions that felt like betrayal. In talking with others, I know I’m not alone. Caregivers are left with guilt. That guilt does not dissolve with the words, “I did the best I could.” We aren’t comfortable talking about guilt, but we should be. We should talk about how family continues by building on the solid foundation of the old supporting the young, then flip flopping as the young protect the old. We should repeat the memories and stories, letting sadness birth positives. By sharing our depth, families go forward and heal.

Thank you for reading. Treasure your family during this holiday season, those with you near and far, and let the young hear about those who live in your memory.
Posted by Jean Lee


Very nice post, impressive. its quite different from other posts. Thanks for sharing.