Meet Florrie Munat, author of Be Brave: A Wife’s Journey Through Caregiving 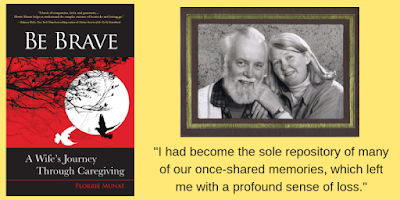 “Are you going to write about this?” Chuck asked.

I stopped sorting the pile of laundry that a nursing home aide had just left on his bed and turned to look at my husband. Had we not been married for thirty-six years, I might not have known what he was talking about. But in addition to our long marriage, for the last two years I’d been supplying him with words he could no longer remember. So it took me only a few moments to figure out exactly what he meant.

He was referring to the soul-shattering changes that followed his stroke and Lewy body dementia diagnosis. Those changes had ended the chapter of our marriage when we lived together in equal partnership under one roof, and had begun the current chapter in which Chuck was a nursing home resident and I was his daily visitor. He was asking if I was going to write about those changes.

Back when I worked as a librarian and writer, and Chuck taught high school English and then edited a national classroom newspaper, our married life included some major changes (a cross-country move from Connecticut to Washington) as well as some tragedies (the death of his ex-wife, which led to my adopting his three young children).

But those changes seemed simple compared to this one because I felt alone now. I had become the sole repository of many of our once-shared memories, which left me with a profound sense of loss.

By asking this question, Chuck was giving me permission to document and reflect not only on the cataclysmic events of the past two years, but also on however many years lay ahead of us. His question: “Are you going to write about this?” was also a request. If he’d been able to frame it differently, Chuck might have said, “It’s up to you to tell our story now because you’re the only one who can. And others may be helped by knowing what happened to us.”

Four more years passed before we had to say our final goodbyes, and during that time he continued to remind me, “Are you going to write about this?”

His question planted the seed that grew into my memoir, Be Brave: A Wife’s Journey Through Caregiving. He even gave me the title on the day he decided to stop eating and drinking and told me to “be brave.”

With the exception of one chapter about our family’s celebration of the Irish New Year shortly after Chuck’s dementia diagnosis, I wrote the first draft of Be Brave after Chuck died in 2009. Then, with the assistance of an insightful developmental editor and a talented book designer, I spent three years rewriting that draft—and in December 2017, Be Brave was finally published. Kirkus Reviewschose it as one of its Top Indie Books of 2017, calling it “a beautiful, richly panoramic book that should reassure caregivers and delight memoir readers.”

While I worked on Be Brave, I was processing my grief by writing and rewriting our story until I found some meaning in those six nursing home years by placing them in the context of our forty-year marriage. This is not to say I discovered a reason why our lives played out the way they did. That remains an unknowable mystery. And if I could have an intact, healthy Chuck back right now, I’d do it in a heartbeat.

But by writing our story, I did find some consolation embedded in our suffering. And that is that no matter how difficult life became during the caregiving years, our love for one another was never in doubt or in danger. In fact, had we not lived through those last six years, we would not have known the depth and magnitude of our love.

Like all good teachers, Chuck asked questions; he didn’t provide the answers. He wanted me to figure out why “writing about this” would be a good idea. I think he knew his question would lead me to the understanding that even after much is taken, much abides. Now his illness is gone. But our love remains.

Florrie Munat is the author of Be Brave: A Wife’s Journey Through Caregiving (2017), a memoir focusing on the years she was a caregiver for her husband Chuck who suffered from Lewy body dementia. Florrie has published several children’s books, articles, stories, and over 150 young adult book reviews. She’s worked as a reference librarian, English teacher, and university press worker. She lives near Seattle, Washington, where she records audiobooks for the Washington Talking Book & Braille Library, and is writing a YA novel and a memoir about grieving. Learn more about Florrie and Be Brave at www.florriemunat.com.

Amazon: Be Brave: A Wife’s Journey Through Caregiving
Posted by Jean Lee