Meet Gincy Heins, Editor of Before the Diagnosis 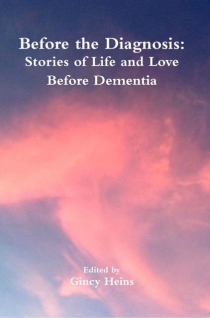 As I was texting a friend who would be meeting my family for the first time, I realized she would never know so many aspects of my husband, and I started to cry.

She would never know the person who talked easily and could captivate people with his stories about working at Disneyland. She would never know this man who could repair anything that needed fixing in our house and was called by other people to answer their home repair questions. Instead, she would see my husband as a rather quiet person who didn’t have a lot of confidence in his abilities and often couldn’t make a decision about the simplest things.

Wiping my tears, I thought of the many incredible people I now know who had Alzheimer’s or another type of dementia. I got a glimpse of who they were through stories their spouses told, and I wanted other people to see how amazing all these people were. Whether they were amazing because they were highly respected in their career or they lovingly raised their family, I felt their stories should be told.

I emailed everyone I knew whose loved one had any type of dementia and told them I had an idea for a book sharing stories about who our loved ones were before they had a dementia diagnosis. I reached out through social media and I asked Alzheimer’s Orange County to help me spread the word. When being filmed for a MyAlzhemer’s video I invited the producer to share a story. I reached out to as many people as I could.

I had no idea if anyone would respond positively, or at all. I hoped for ten stories and was thrilled when I received 36 contributions! This was so much more than I dreamed of receiving!

I enlisted two friends to help with the editing. Together we read through each contribution many times and edited for clarity, all the while trying to keep each person’s story in their voice. All authors approved the final version of their story.

Finding the perfect publishing option was a challenge, but I knew we would find the best way to publish this important work. Most publishers never responded. One was very interested in the concept, but didn’t want to deal with a book involving 36 authors. Self-publishing had too many considerations. A friend came to the rescue and handled that for me. Whew!

On March 12, 2018, Before the Diagnosis: Stories of Life and Love Before Dementia was published on lulu.com (and is now available there as well as from Amazon and Barnes & Noble). This anthology of 36 stories has been well-received and shows that people are not forgotten or unimportant because of their diagnosis.

As of the end of December, over 230 copies of the book in print and digital formats have been sold. Each of the 36 authors who participated in this book were given the option of donating their share of the earnings or retaining them. I am thrilled that over 90% of the revenue is being donated to one of four nonprofit organizations: Alzheimer’s Orange County, Alzheimer’s Association, Lewy Body Dementia Association and Alzheimer’s Research and Prevention Foundation.

Purchasing this book gives back to organizations that help us on this journey, benefitting all of us.

Gincy Heins is the creator and editor of Before the Diagnosis: Stories of Life and Love Before Dementia and one of the co-authors of the 365 Caregiving Tips: Practical Tips from Everyday Caregivers series of books.

She teaches classes for older adults, is a Senior Commissioner for Cypress, CA, speaks at conferences and on panel discussions, and volunteers at the public library and with Alzheimer’s Orange County. She and her husband are the proud parents of one grown son.