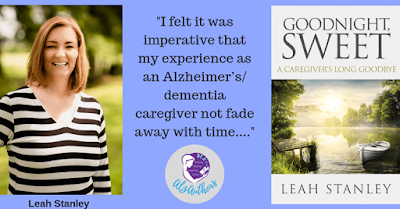 By Leah Stanley
I began writing Goodnight, Sweet: A Caregiver’s Long Goodbye in 2001. For me, committing the story to print was a cathartic experience following the deaths of my grandparents two years earlier. Edward Meade had battled an unspecified dementia while his wife Clara was afflicted with Alzheimer’s. As their designated caregiver, a role which I had gladly—and sorrowfully—taken on, I walked alongside them down that tedious road while loving, caring for, and protecting them.
Every afternoon when my then almost two-year-old son would go down for his nap, I would sit at my computer and write diligently, reliving the moments which, when put together, told the full story; I would laugh and I would cry as I remembered the decisions and recalled the words, reactions and facial expressions of those around me. I felt it was imperative that my experience as an Alzheimer’s/dementia caregiver not fade away with time, but that it be shared because I came to realize there were so many others following that same winding trail I’d walked, and I remembered how I was always encouraged when I could talk with someone who had been engulfed in a similar circumstance. I believe it’s one of the ways God designed us, being able to meet on the common ground of shared events.
Following the birth of my daughter in 2002, the manuscript was shelved for several years as I took on the role of full-time mom. By spring 2016 I began to sense it was time to re-enter the story-telling mode and finish the work I had started fourteen years earlier. Additionally, I was spurred on by the sheer number of people I encountered who were facing the same issues I’d dealt with myself. I think I was strangely astonished when I had to acknowledge the disease had not “died” with my grandparents; it had marched through the years with aggression, and a shocking number of people had been devastated by it.
The book details my entire experience from the moment I received the first phone call to settling their estate nearly four years later. I have consistently heard people say my writing is very transparent as I share the range of emotions which accompanied caring for my grandparents; several readers have stated they couldn’t put it down—encouraging words for any author to hear!
When the book was complete, I began hand-picking readers to endorse it—I chose a medical social worker, two former caregivers and a physical therapist. Their responses were overwhelmingly positive, and the medical social worker even said the book is an excellent resource for people who are anywhere on the path of providing care for a loved one.
It is such a blessing to know my grandparents will be remembered, and our painful experience wading through Alzheimer’s and dementia may be able to guide others to the realization that there is hope, and caregivers do survive.
Goodnight, Sweet: A Caregiver’s Long Goodbye was released on March 1, 2019.  Purchase an eBook or paperback copy on Amazonor at Barnes & Noble.
About the Author

Leah Stanley was born in Memphis, Tennessee, where she grew up and attended college, meeting her husband, Chris, during their freshman year. She earned a bachelor’s degree in Journalism from the University of Memphis and has a background in corporate communications and freelance writing. She lives in Houston, Texas, with her husband, son, daughter, and their boxer/beagle rescue dog Brooke.
Connect with Leah
Facebook: Facebook.com/LStanleyBooks
Twitter: @LStanleyBooks
LinkedIn: https://www.linkedin.com/in/leahstanleybooks/
Posted by Jean Lee