Meet Eileen Opatz Berger and Joan Berger Bachman, Authors of If Only You Would Ask, A Guide to Spending Quality Time with the Elderly 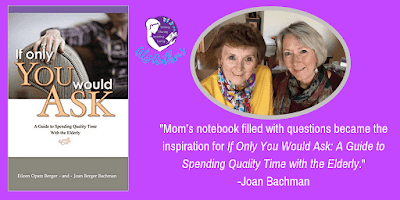 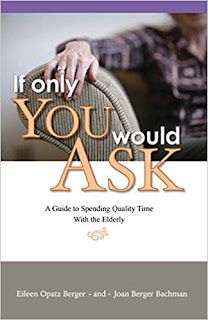 For five years, Joan Berger Bachman and her 92-year-old mother, Eileen Opatz Berger teamed up to write, If Only You Would Ask, A Guide to Spending Quality Time with the Elderly.This easy-to- use book is a conversational resource, a manual and a tool for all those who struggle to carry on meaningful, enjoyable conversations.  How did this book come about?
Here is Joan’s Story:When my father-in-law Bill was nearing the end of his life, I would visit him quite regularly. He had made the decision to stay in his own home until the end. Winters in Minnesota are long, cold and lonely, especially for someone who is afraid and/or unable to venture out. Being the dutiful daughter-in-law that I was, I felt compelled to make the 100-mile drive from Rochester to St. Paul to visit him. We would sit at his kitchen table, and I would tell him about what the kids were up to… and what I had been doing. His major topic of conversation was the rabbits he saw as he stared for hours out the back window of his house.
During this time, I shared with my mother how difficult visits with Bill were becoming. He had so little to share, and I wondered if the visits even mattered.
Not long after, Mom gave me a notebook filled with a list of questions. She suggested I try asking Bill some of these questions to make our visits more enjoyable. “Leave it on the counter,” she advised. “The grandchildren might appreciate using the questions.”  I took the notebook over to Bill’s house and meant to get started the next time we visited. Unfortunately, that was the last time I spoke with Bill. And now he is gone, and so many questions remain unanswered.
Mom’s notebook filled with questions became the inspiration for If Only You Would Ask: A Guide to Spending Quality Time with the Elderly. Not long after Bill died, when Mom and I were together, we talked about Bill’s last months. We figured there must be thousands of elderly people, just like Bill, who would enjoy sharing their stories, if only someone asked them the right questions.
Initially, If Only You Would Ask was written as an enjoyable resource for anyone who spends time with the elderly, be they adult children, grandchildren, friends, clergy, therapists, volunteers and/or caregivers. What we have learned, however, is that this resource has great potential as a way to encourage enjoyable “trips down memory lane” with those suffering from Alzheimer’s and dementia. Some people with Alzheimer’s preserve their long-term memory. Consequently, they enjoy sharing stories from their past even though they might not recollect these conversations in the short term. Sometimes questions about “food” or “vacations” or “school days” will ignite a memory, creating a source of comfort and delight! All of the questions in If Only You Would Ask are open- ended. There are no right answers. People who struggle with memory loss will not experience the stress related to questions which require a specific response.
With 42 topics and over 400 questions, If Only You Would Ask provides a framework for tapping into memories that may not have been thought about or talked about for years! Since its release in late December, 2018, If Only You Would Ask has been featured on Mayo Clinic Radio and was one of the winners for innovative products at the 2018 National Caregiving Conference in Chicago. If Only You Would Ask has transformed conversations for many families. In fact, they look forward to their next visits!
Every person has stories to share, If Only You Would Ask!

About the AuthorsJoan Berger Bachman is extremely pleased and proud to be coauthoring a book with her mom! As a teenager, Joan recalls her mother’s advice: “When you are in a social situation, always make an effort to ask each person three questions. This shows that you are interested in what they have to say….” In other words, give people the opportunity to talk about themselves! Generally, people are pleased to share, and you will have deflected the attention from yourself! So, it comes as no real surprise that four decades later, she has coauthored a book filled with questions to promote quality conversations!
Joan resides with her husband John in Rochester, Minnesota. Proud mother of three grown children and grandmother to six, she is grateful for family, for health, and for friends who continue to enrich her life.
Eileen Opatz Berger graduated from the College of St. Benedict and the University of Wisconsin/River Falls. Presently she teaches English as a second language. In addition to her five children and their families, her foreign students have been the joy of her life. Favorite pastimes include travel, writing and tennis. She lives in White Bear Lake, Minnesota.
For more information about If Only You Would Ask please visit www.ifonlyyouwouldask.com.  Mayo Clinic, Rochester Minnesota produced a Youtube video about the book : https://youtu.be/Wfxz-ZV1YIUPick up a copy on Amazon here.
Posted by Jean Lee