Reposted from with permission from AlzAuthors.com 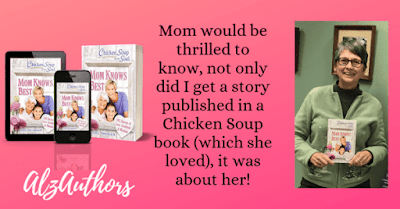 By Marianne Sciucco
I’m proud and thrilled to announce that one of my stories was recently published in the new Chicken Soup for the Soul “Mom Knows Best.” It’s one of 101 heartfelt stories about life, love, and … moms. The story, “Mom’s Unexpected Birthday Guest,” was inspired by my mom on the occasion of her 90th birthday.
Mom loved birthday parties, especially her own, no matter how big or how small. The 90th was a big one, but, unfortunately, Mom had broken her hip and was laid up in rehab. We had to improvise to celebrate her special day, but in doing so something wonderful happened that made all the difference.
This is a deeply tender story as it deals with my stepfather Fred’s dementia. My mother was always deathly afraid of Alzheimer’s and dementia because she watched it take her beloved older sister, Gilda. Mom, a devout, lifelong, old-school Catholic, literally prayed every day, “Please, God, don’t let me get Alzheimer’s.”  Her prayers were answered because up until her last days she was as sharp as ever. But Alzheimer’s would strike in a different way, taking her beloved Fred. Funny, I never worried about him. I was too busy worrying about Mom. When I wasn’t looking, dementia swept in and took him from us: frontotemporal lobe, vascular, and Alzheimer’s, the doctor wrote in his report. Mom was shattered. She could not bear this diagnosis, and did not bear it well. This 90th birthday party was a bright spot in their dementia life, one of the very few they enjoyed after he was admitted to a memory care unit.

I did not set out to publish in this wildly popular series when I penned this story. I actually wrote it for a different anthology and it was rejected. Not one to dwell on disappointments, I tucked the story away. When I saw a post in a Facebook writers community that the Chicken Soup for the Soul folks were looking for stories, I pulled this one out, polished it off, and sent it on its way. It took months to learn it was accepted, and frankly, I’d forgotten all about it. What a wonderful surprise to get that acceptance letter.
Mom would be thrilled to know that not only did I get a story published in a Chicken Soup book (which she loved) but it was about her!
The book is a wonderful collection of stories and will make a terrific gift. It’s available on Amazon and where all books are sold.
About the Author

Marianne Sciucco is not a nurse who writes but a writer who happens to be a nurse. A lover of words and books, she dreamed of becoming an author when she grew up but became a nurse to avoid poverty. She later brought her two passions together and writes about the intricate lives of people struggling with health and family issues. Her debut novel Blue Hydrangeas, an Alzheimer’s love story, is a Kindle bestseller; IndieReader Approved; a BookWorks featured book; and a Library Journal Self-e Selection. Marianne has written a prequel to Blue Hydrangeas. Christmas at Blue Hydrangeas is a slice of life story from before Sara’s Alzheimer’s. She is currently working on another prequel, A Wedding at Blue Hydrangeas, also pre-Alzheimer’s. Marianne is a co-founder and admin of AlzAuthors. A native Bostonian, she lives in New York’s Hudson Valley, and, when not writing or teaching classes in independent publishing, works as a campus nurse at a community college.
Connect with the Author
Website
Facebook
Goodreads
Linked In
Pinterest
Twitter
Posted by Jean Lee