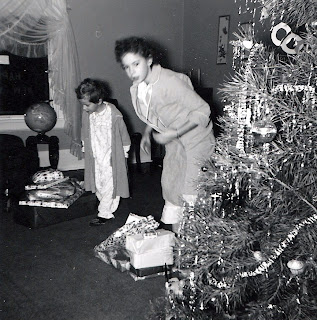 No question, the holidays make us think about Christmas times from the past.

I could write about recent unpleasant Christmas memories, such as Christmas 2006, the year my sister, Annette, and I forcibly moved our parents out of their home, and into a senior living facility––or Christmas 2008, when we had to move them to a dementia unit, leaving them behind locked security doors. Both situations are guilt-laden and still bring up nausea. So my mind cycles backward, like rewinding one of the early mechanical digital clocks where the numbers actually flipped on tabs so quickly you couldn’t distinguish individual digits as the clock was reset.

This ‘flashbacking’ was prompted by a conversation I had yesterday when speaking with a friend, comparing tales of Christmas times from our own childhood. This friend told me she believed in Santa until she was––as she put it–– ‘married.’ I’m sure she was kidding, or her husband might have wondered about her sanity. But the conversation took me back to childhood memories of my family Christmases in the 1950’s and 60’s.

My family attended church every Sunday. Christmas Eve Candlelight service was the most mystical of the year––with the exception of the year a friend’s screams as well as the smell of melting hair filled the sanctuary when her long locks brushed through her lit candle during Silent Night.

With church and faith as our focus, Santa just wasn’t. Ed and Ibby didn’t exclude “Santy,” as my dad called him, but Santa and church were kept separate.

Digging through old pictures, I found one of Annette and me on Christmas morning. There were few presents––the most exciting being the cardboard Corner Store Dad had assembled the night before. I felt like big stuff, because Mom let me put real Jello, BandAids, Corn Flakes, and canned goods on the shelves. 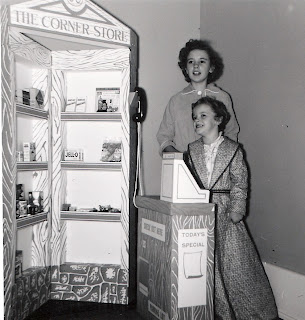 I played with that store for years, begging Annette––seven years older––to play with me. This picture was snapped one of the times she gave in.

Our tree was decorated with ornaments we’d made at school, and silver tinsel, hung one tiny strand at a time. Annette and I usually gave Mom and Dad something we’d made at school. Mom treasured these trinkets, stashing them away for what she thought was forever. Those items resurrected, yellowed and stiff with age, to be put to final rest in the trash during my cleanout of their home.

Ed and Ibby didn’t exchange presents. They needed none, as they had each other. However, I do remember, after I was old enough to drive to the mall to Christmas shop with friends, Dad would sneak me $10, asking me to buy Chantilly cologne or dusting powder for Mom. I’ll always remember the light pink box with the white lace. Even now, when I see it in a store, I spritz the sample on my wrist, taking in my mother’s sweet, old-fashioned scent.

Long into my young adulthood, however, the Santa/Christ disconnect persisted for me. Church and Santa seemed opposite, yet connected in some way I couldn’t figure out.

When I had my own children, Santa played a role in our holiday. We decorated the house with Santa images, but Mom’s hand-me-down nativity took center stage under the tree. My children played with Mary and Joseph as though they were Barbie and Ken with a baby. I took the kids to see Santa, and my husband read The Night Before Christmas, but we never pushed literal belief in the man in the red suit.

At that time, we lived in a little cape cod house. Bedroom space was upstairs in a finished attic with steeply pitched ceilings and rough pine slats for flooring. One Christmas Eve, when our son was about age three, and our daughter seven, they sat at the bottom of the stairway behind the door that was appeared closed, but had been opened just enough for a peeking crack. As my husband and I carried presents hidden under the bed to the tree––our daughter whispered, “See, it’s Mom and Dad. There’s no Santa” to her younger brother. Wow, an older sibling can really burst your bubble.

It may have been that Christmas that I bought this small statue called the ‘Kneeling Santa’ for my mom for Christmas. 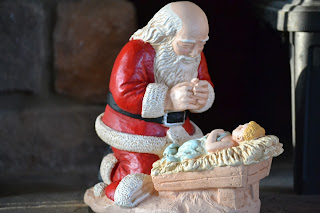 It’s one of the few things I kept from the cleanout, displaying it year round on my bookshelf.

That statue allowed me to let Santa and my faith cohabitate. I explained to my children that God gave us the gift of his son. We celebrate that birthday on Christmas, by giving gifts to those we love. Santa gives gifts to children to honor the child God gave to us.

The bitter conflict between faith and secular commercialism, was now resolved in my mind by this little statue.

I could go to lament the overindulgence of material things, and the grumpiness seeping out of us as we try to find the perfect gift and stretch our budgets to the point of a balloon ready to pop, but, you can breathe a sigh of relief––I won’t. Instead, I’ll just remember the simplicity of giving something from the heart, maybe a hug, homemade cookies, or a thank you, to those we love, and those in need, at this time of year.

Thank you for visiting Alzheimer’s Daughter. Blessings to you all, whatever your faith may be. Jean