The Power of Photos

After my sister and I pried our mentally failing parents from their life-long home, moving them to a senior community, at the end of 2006, I started shoveling out the remainders of six decades of marriage and family. I had to be ruthless. The memories of these items had been lost to the disease--dissolved from my parents' minds, like sugar-cubes dissolving in Mom's hot cup of tea. I knew the items had intrinsic sweetness, but I couldn't connect the dots to find the meaning. Every day after work, as I stopped at the house––emptied of people, but filled with debris––I had to remind myself, Things are only things. Keeping things won't keep Mom and Dad, while I mourned the loss of my parents who were still living.

Quickly sorted family photos––images turing from black and white to color as time moved forward––any having people, places, or situations I remembered, were rare items spared certain death in the garbage.

We all have blurred memories of our past, but still photos rotate the camera lens of our lives into focus, showing clear details, reviving lost memories. 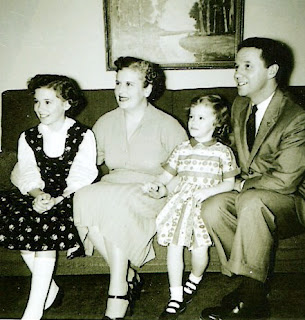 Annette, Ibby, me, Ed...who was taking the picture? 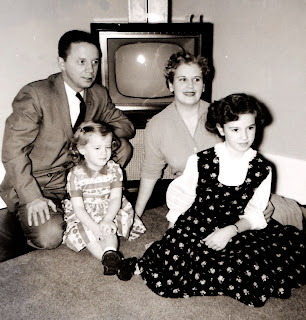 Our eyes look to the left in this picture. Mom's pasted smile, and Dad's readiness to spring to action, make me imagine my sister may have been beckoning the dog, 'Midnight,' to creep into the picture. My mother's hand on Ann's elbow looks to have stilled my sister's gesturing. I fidgeted, my five-year-old attention span––gone.
In those days, taking a picture in front of the television was like posing in front of a fireplace in today's world. The Philco in the background played three channels through a blizzard of black and white static. 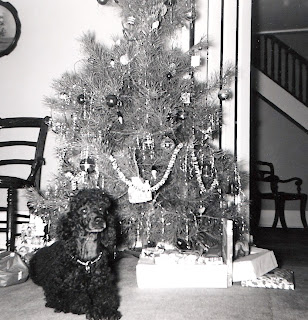 Midnight merited his own picture. 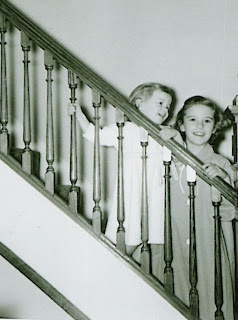 In this photo Annette and I stand on the spindle staircase Mom had stripped and refinished when they'd moved into the old house, then grumbled about dusting. She'd tell Annette and me to put socks on our hands and run them up and down the spindles. We'd soon lose interest and she'd have to finish the job. 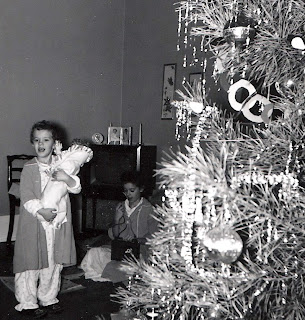 In the early 1960's, Santa delivered the baby doll I'd dreamed of. Annette received a transistor radio––the latest technology––sized like a large handbag. I don't think her allowance covered the cost of the eight D batteries required every few days. She slept with it playing under her pillow, even though Mom and Dad thought she'd turned it off. 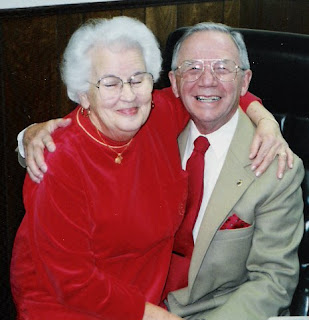 Minutes, days, months, and years chink forward, but the memory evoked by a photo transports us, timemachine-like, reeling backward through our own history. It's good to look back, to remember. Memories help us move forward with targeted intent, realizing how quickly time passes.

This Christmas, my family will gather around Mom's old dining room table. If you saw this table, you'd probably think it should have been put in the trash, or hauled to the garage and used for a work bench long ago. It's cracked and creaky, stained and gouged, held up by a four by four post in the center, but it's the place our family gathered every Christmas for my entire life. Sitting around it makes me think of Mom's homemade meatballs the size of tennis balls, soaking in her made-from-the-garden spaghetti sauce, and the many games of Uno and Monopoly played after dinner, while munching on her pies and cookies as the table was being cleared. Our world stopped to take time to be together around that dilapidated table. 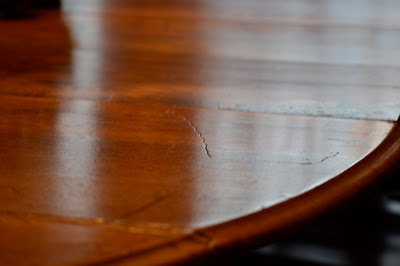 This year I'll spread the old photos out with the new, in the middle of Mom's table, hoping to conjure conversation of the past, pass on tradition and memories, and build new ones by snapping the unposed and unsuspecting. Hopefully, some of these artifacts make the cut when my belongings are sorted, determining the trash from treasure, at my life's end. 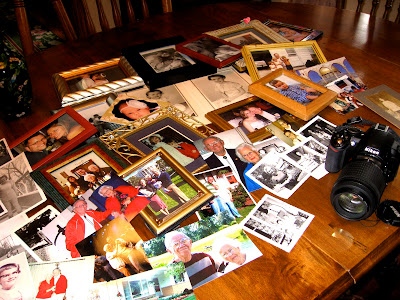 I'll miss you, Annette, and all far away family members, at Christmastime this year.
Christmas blessings to all reading Alzheimer's Daughter. Take some pictures and make some memories.

I loved your post, as usual. Really reminds me to stop worry that the floors aren't mopped (still!) and take the pictures of the kids that I should be taking!

I just discovered your blog, and this post is simply beautiful. We are dealing with a mother in law who does not have alzheimer's, but other dementia and psychosis. It's indeed heartbreaking to see her one day remember so much, then the next not remember how to use a phone. I'm so happy to have discovered your blog, and look forward to a few days of peace after Christmas where I can sit and read for a while!!

I can't wait to sit at that table this Christmas! Your posts are amazing, Mom! I smile every morning when I see the photograph of Grandma and Grandpa that hangs on my mirror. I wore my cross today and missed Grandma. She's smiling, I know!

Kim, thanks for visiting. I'm sorry about your mother in law. Yes, those unpredictable changes in behavior are heartbreaking, as are the decisions that have to be made to safeguard a loved one with dementia. I wish you peace as you make this journey. Jean

I just found your blog. My mom has a rare form of dementia, called semantic dementia; she is only 51 and declining quite rapidly. I anticipate this was the last Christmas that she will know the meaning of the holiday. We are just trying to make the most of our time and create memories, taking lots of pictures! Thanks for sharing your story. (I have a blog also if you're interested in reading :) Take care!

Cassandra, I'm so sorry about your mom. In retrospect, it really is a process of mourning a parent who is still alive, yet changing in unpleasant ways. You are so wise to make the best of each day. As we go through this journey, we are visited by blessings if we allow ourselves to recognize them. Who is the caretaker for your mom? Neither of my parents were well enough to care for the other--simultaneously lost. Leaving them behind locked doors caused me pain and guilt. My emotions were nearly impossible to convey, even to those closest to me, my husband, my children. Blessing to you Cassandra. I'll think of of you often. Please send me a link to your blog.