Today would have been my Dad's 93rd birthday. He died one year and eight months ago of Alzheimer’s.

My dad was a Depression Era kid and a WWII veteran.

When I was a growing up, my memories of Dad are scant. He was a driven businessman, working from before sun-up to after sundown, arriving home late for dinners, attending American Legion or Masonic meetings. When he was home, his time was spent working in the garden, completing home repairs, or watching the news.

Throughout my childhood, teenage years, and adulthood, I knew him as a hard-working father. However, I can honestly say, I never knew the heart of my dad until Alzheimer’s disease ravaged him to the point that he didn’t know himself.

As Dad lost his mind, I found the man who was my father.

I saw him as an unshakingly devoted husband to my mom. I remember him kissing her, as though they were honeymooners, leaning over the arm of her reclining wheelchair, as everyone else in the room knew she was dying. With a grin on his face, he repeated his mantra, “We’ve been so lucky––we’re so happy.”

I came to appreciate his joy in life as I walked toward him one day in the locked dementia unit, looking him in the eye and smiling. His face brightened––he was so excited he nearly wiggled out of his skin. We approached each other and he took my hand, bubbling, “It’s so wonderful to see you. This is the best day of my life! Now who are you?”

I witnessed his deep, yet innocent child-like faith, as I entered his room, on his last birthday, his 91st. He turned to face me, extended his right hand to shake mine, saying, “Hello, I’m Ed.” I told him I knew who he was, because he was my father, and I was his daughter. He replied, “Really?” He asked me, “Where are my parents and that woman I admired?” I told him they awaited his arrival in heaven. He turned to the window and waved at the clouds.

The professional man, his goals, the career he’d built, all was gone, like ashes blown away in the morning after fire dies. The deeply buried embers, the man who was left at the end, the man dying of Alzheimer’s––that’s the man I carry in my heart as Dad. 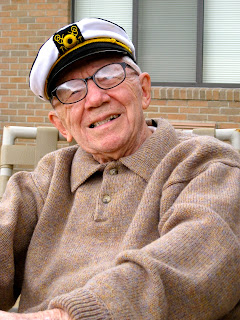 What a dear, dear post! I loved my mother more than ever the last years of her Alzheimer's. There were many moments of extreme sweetness to be found.

Thank you, Linda, we are both blessed to have found glimpses of happiness within the deterioration of the disease.