Meet Kate Swaffer, author of What The Hell Happened To My Brain 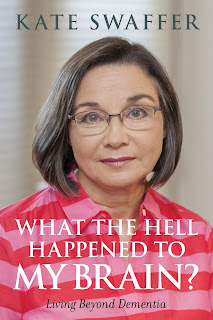 There are currently more than 47.5 million people diagnosed with dementia (WHO, 2015) and I am one of them, diagnosed with younger onset dementia at age 49. I am a wife and mother of two teenage boys, working full time and studying as a mature age student at the University of SA. There is also an estimated one new diagnosis every 3.2 seconds somewhere in the world (ADI, 2015). The health care sector, and service providers all told me (in different ways) to “give up work, give up study, to quickly get my end of life affairs in order, and to get acquainted with aged care, including considering going to respite one day a month to ‘get used to it!’" This is still happening, to almost all people with dementia, of any age today. I termed this Prescribed Disengagement® and believe in it so strongly, I also Trademarked the term.

The stigma in the community is based on myths and fear, and also comes from what I describe as passive stigma in the sector, which is probably based on a lack of education, and also misperceptions about dementia. There is a notion we are all end stage at the time of diagnosis, which perhaps was the case 30 years ago, but is no longer so as the global push for earlier diagnosis has changed that. Yet, we are still being treated and managed as if we are end stage dementia. Increasing/improving undergraduate and postgraduate education is essential, as is awareness in the community, which is one of the reasons I started blogging, have embarked on a Ph.D. and published a book earlier this year.

Telling us all to go home and get ready to die, rather than telling us we can live with dementia, and to ‘fight for our lives’ as we would be told with any other terminal illnesses, even those without a cure, is not only unpalatable, it is unethical. The key message in my book is that we should be supported to live with and beyond dementia, not only to die from dementia.

In my ideal world, when someone with dementia is diagnosed, they will be offered authentic rehabilitation, as they would if they had a stroke or brain injury, and that we will no longer be stigmatised or discriminated against. These are the main reasons I placed dementia in the Human Rights space, as well as partly why I wrote my book. Our human rights, and our disability rights, under the UN Convention of the Rights of Persons with Disabilities (CRPD) must be accessed.

My dream for Dementia Alliance International, which is already the peak body for, and the global voice of people with dementia, to have the capacity to support and advocate for people with dementia in all countries; we currently represent 36 countries though our membership. We all MUST empower and re-enable people with dementia to continue to live, and to remain independent for as long as possible, which is simply a basic human right under Article 19 of the CRPD.

Last year, I was honoured to receive a number of awards for my work, and am proud to have been a state finalist in the Australian Of The Year Awards for 2017, a winner of the National Disability Award as Emerging Leader Disability Awareness, a winner of the Bethanie Education Medallion, and also very proud to be the announced the International Dementia Leader for 2015 in the University of Stirling International Dementia Awards. During Dementia Awareness Week in the UK this year, Jessica Kingsley Publishers also quoted my book as being a best seller on their blog, of which I am also immensely proud. In writing that book, if I helped only one person with dementia I would have been thrilled; it appears to have done at least that. Please join the conversations on my website Creating life with words: Inspiration, love and truth.
Posted by Jean Lee