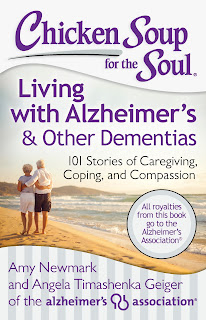 I write about Alzheimer's because my father's experience with the disease turned me into an advocate, not just for those with Alzheimer's, but for their caregivers as well.

My father lived with Alzheimer's disease for about four years. In that time, my father went from fully independent to living in a memory care center. My mother went from healthy and active to stressed and exhausted, and I believe the prolonged period of stress contributed to her colon cancer diagnosis, just six months after my father died.

As a long-distance caregiver, I experienced my own challenges. It was difficult keeping track of my father's condition, as details were filtered through my mother's optimism, which was welcomed at times, and a hindrance at others. Because my father had not shared his end-of-life wishes, my mother and I were forced to muddle through those difficult decisions. I now encourage everyone to document their medical care wishes, regardless of age and current health.

Shortly after my father died, I began The Memories Project blog. I wanted to make sure I captured the memories I had of my father in writing, and through the process, I realized there was so much I did not know about him. The lesson I learned was to never take a loved one, and their stories, for granted, as Alzheimer’s can swoop in and rob a family of those precious memories. What began as a tribute to my father has transformed over the years to also include discussions on caregiving.

Starting the blog opened up other writing opportunities, which allowed me to further discuss Alzheimer's impact upon society. I was featured on NPR's Shots blog and also had an essay included in Chicken Soup for the Soul: Living with Alzheimer's and Other Dementias. I received the 2015 Rick Bragg Prize for Nonfiction from the Atlanta Writers Club for Greetings from the Nursing Home, a personal essay about my father's dementia experience.

I have gained blogging friends from The Memories Project that I hold dear in my heart. Over the years, some have lost parents or other loved ones, many to Alzheimer's or other forms of dementia. I have learned so much about dementia, in all of its dastardly forms, through their blogs. Hearing their stories only encourages me to continue advocating for better Alzheimer's treatment options and greater assistance and resources for caregivers.

Currently, I am a featured author on The Caregiver Space and am working on a collection of personal essays about Alzheimer's and caregiving. Alzheimer's may have claimed my father's memory, but I hope to never forget the impact the disease had on my family, and how we must come together as a community to raise awareness and push for better treatment options, more affordable care options, and financial and emotional support for caregivers.

Joy Johnston has been a digital journalist since 2002, and has worked for the Atlanta Journal-Constitution, About.com, and AOL. She currently serves as a National Content Editor for Cox Media Group, where she specializes in creating viral content that drives web traffic and social engagement.