“To plant a garden is to believe in the future.” Anonymous 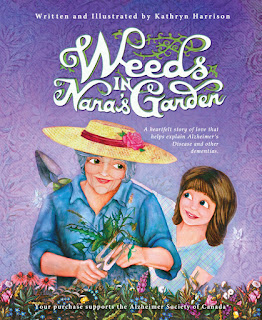 It was a spectacular day in my mother’s beautiful garden. And despite her recent decline from dementia, my mom, or “Nana”, walked happily together with my young daughter and I. My active 5-year-old girl skipped ahead through the now somewhat overgrown beds, but soon circled back with freshly picked blooms to share.

Later that day, as we arranged the flowers, my daughter talked about how Nana’s garden had more weeds than before. This observation gave me an opportunity to explain again that her Nana had a type of brain disease that we’d call dementia. It was Frontal Temporal Degeneration. My young daughter then made a clever connection, remarking that like the weeds taking over the flowers, the disease was taking over Nana’s brain.

This powerful metaphor immediately stuck and we used it throughout my mom’s dementia journey to help explain the disease. I found it particularly helpful to encourage my kids to stay connected with their Nana; something I treasured because having my young children remain involved really helped!

My kids were more accepting of their Nana’s changes than most adults, not so much focusing on what we were losing with the illness but on what could be gained from the current situation! Early on, they found their Nana had a spontaneous spirit and was eager to play with them! Later, as she became quieter and less mobile, they found she was always available for hugs and listening. They remained positive throughout the journey and lent me strength. Further still, they learned to help care for her as she progressed, developing their own compassion and confidence.

From my dementia experience with my kids, I was motivated to look for ways to help other families further engage children. Fast forward several years and my daughter’s clever metaphor was the inspiration behind my just published illustrated children’s book about Alzheimer’s disease and other dementias, Weeds in Nana’s Garden. I decided to create an approachable but informative picture book so that I could help many children better understand these brain diseases and in so doing, facilitate their involvement and help even more families!

To bring the book to life, I spent much time in my mother’s garden and painted large scale illustrations. I also visually added a portrayal of the disease progression. As you turn each page, you see less colour and light, more darkness and tangled lines. Then, unlike relentless dementia, this garden gets a second life. The granddaughter in the story learns to take over as the magical garden’s caregiver and brightness starts to return to the pages. We’re left with hope for the future.

Today, this hope stems from the many efforts currently underway to support and find a cure for dementia diseases. And to join this movement, each book sold will contribute $1 towards the Alzheimer Society of Canada – an organization that has supported me greatly and Canada’s leading health charity for dementia diseases.

As well as receiving positive reviews and hearing from enthusiastic customers, a few surprises have resulted since my book’s launch 6 months ago. There has been a broader interest in the book for elementary schools than I expected. Many teachers are adding it to their classrooms and find that kids are not only drawn into the story but are bursting eagerly with questions afterwards. In fact, the interest is great enough that plans are underway to partner with my local Alzheimer Society and visit several elementary school assemblies this year. Using this forum, I can connect with hundreds of kids at once! I’m very excited to be able to open up the minds of so many children about dementia diseases, as it will certainly build greater overall understanding!

Also unexpectedly, from my online communications about the book I have formed new, rich relationships with many people around the world who share a dementia experience. Although each person’s involvement is unique, we are powerfully connected by these diseases and provide frequent and heartfelt advice, encouragement and inspiration for one another. When I embarked on creating a book for kids, I never thought it would result in creating such supportive and meaningful interactions with adults!

Today, I walk happily together with my now teenage daughter through my mother’s garden and feel proud and grateful about how, although different, her garden is still blooming with such important gifts to share. 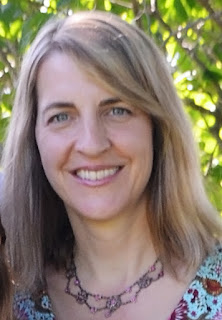 Author / Illustrator Kathryn Harrison is a business professional turned artist. She has a B.Sc. in Psychology, an M.B.A and worked for over a decade as a Communications professional before earning a Fine Art Diploma from the Toronto School of Art. Although she has done much creating in her life, in writing and illustrating this picture book, Kathryn has been able to layer all her varied abilities together.

Stirred by her personal experience with her mother’s dementia, Kathryn created this book to support families and spread awareness of Alzheimer’s disease and other dementias. To take it further, she founded Flipturn Publishing to publish the book, enabling her to make donations to the Alzheimer Society of Canada for every book sold. A former competitive swimmer, Kathryn used the name “Flipturn” to acknowledge the need to turn and face a new direction once dementia arrives in the family.

She dedicated the book to her mother, Bonnie Harrison, but it was created to honour all those who are afflicted with dementia diseases and all those who never stop loving as it endures.
Posted by Jean Lee