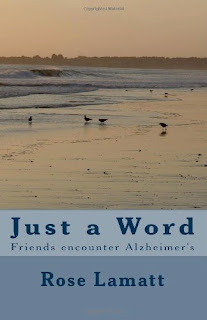 When I found Carol's little black date books in storage and my recordings of Carol's fight with Alzheimer's, I knew I needed to combine the two and write a book. That’s what I did, so others would know this awful disease.

In 1990 little was known about Alzheimer’s when the doctor called saying, “I’m sorry, Carol has a dementia disease known as Alzheimer’s.” She was sixty-four years old and I didn’t believe it. I had to fight my way in and out of the disease's process to learn it. Being a gay couple, we didn’t run into many folks like us at caregiver support groups and felt this story needed telling.

"Today is the first day I've had the desire to write. I've thought about it for months, even years, but this is the first time I feel the need. I want to write of the struggle she's going through with this horrific disease; the everyday living. I want to write how the caregiver loses herself along with the victim. Victim--first time I've used that word. But there is no other word that best describes it. Carol is a victim of time.

"I've lost any thought that she'll get better. I've come to the conclusion I'm living alone, even though she's with me in body. She doesn't talk to me in understandable conversation. We play charades to discover what she wants. I've stopped all walks and exercise. I don't want to go to the store because I'm alone, even though she's at my side. I hate life. I'm eating fatty foods, hoping to have a heart attack and die. Then I won't have to face her dying in front of me, inch by inch."

Alzheimer's. Just a word... How can one word destroy two lives...yet I learned so much from that one word. Through the years, those with the disease and their caregivers have thanked me for writing JUST A WORD. When I gave books to neighbors they said the book helped them know what the future held for them, how to plan ahead. At some point I’d hoped it would become a play. Maybe, who knows?

Am I at peace with what I wrote? I’ll say yes, but at times I wish I had written it in story book form. But this was the truth, what actually happened, written in my words and Carol’s daily date books. But I won’t truly be at peace until I see a cure for this horrendous disease.

For these past ten or more years I’ve posted news articles so others can learn what Alzheimer’s does to the person who cares for the patient. How a patient can walk out the door of their home, or assisted facility, never to be found again. How a caregiver can become ill and destitute because the disease drains body and money.

Carol's Alzheimer's led me to lead support groups, work in Adult Day Care and an Assisted Living facility. Alzheimer’s is still in my life every day, as I help others online or wherever I live.

So many years later, Carol comes to me as Flutter By, her name for Butterfly. She comes in dreams. At times I feel her surround me saying, "Everything will be okay." Especially when I was living in a homeless shelter.