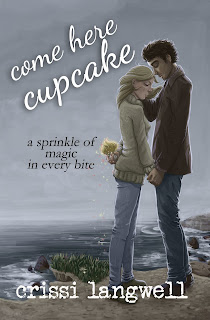 The story of Come Here, Cupcake focuses on an aspiring baker, Morgan Truly, and the magical ability she’s discovered that allows her to infuse her baking with feelings. If she feels sad while baking, anyone who eats it will feel sad. If she feels happy, her baking will make people feel happy. And if she bakes while feeling romantic…well, you can guess what happens to anyone who tries it. This new ability, along with finding new love, is confusing enough. But adding to Morgan’s life changes is caring for her mother, Karen Truly, who is suffering from Alzheimer’s.

Morgan moved back home to help care for her mom, unwilling to put her in any kind of care facility. She hired an aide to help with Karen’s care, but Morgan still found herself caring for her mom in ways she never had to worry about before. At one point, Karen shatters a glass on the floor in anger, endangering her bare feet. In another scene, she tries to burn the house down. Later, she runs away.

The theme of Alzheimer’s has found its way into more of my books than just this one. In my book, The Road to Hope, one of the main characters is suffering from the early stages of Alzheimer’s, experiencing bouts of forgetfulness. In the sequel book, Hope at the Crossroads, this character’s Alzheimer’s has advanced rapidly, and she is unable to remember anyone. In Come Here, Cupcake, Karen doesn’t recognize her own daughter, mistaking Morgan for a variety of different roles.

When certain themes show up in my writing, it’s usually because I’m working them out in my real life. Alzheimer’s is no exception. My grandmother had Alzheimer’s before she passed away in 2010. I remember the last time I saw her. She’d kept her eyes closed most of the visit, almost as if she were ignoring all of us. When my aunt announced who was there, she opened her eyes when she heard my name.

“Well,” she said, one of the only words I heard her say that day. I’ll always remember that word from her, even the way she said it. That word let me know that she remembered me, even when she’d forgotten everything else.

Knowing my grandmother had Alzheimer’s, I sometimes wonder if this is my fate. Even at just 40, I’ve recognized a few holes in my memory. I blame it on the abuse I suffered in my first marriage and my memory’s protection by forgetting certain traumas. That forgetfulness has haunted me. A few years ago, I went for a run in my neighborhood, and then stopped when I realized I’d run to an unfamiliar street. Panic welled up inside me as I looked around, trying to make a connection to where I was. Everything seemed both strange and familiar, and I knew I was supposed to recognize my surroundings. As my clarity slowly returned, I realized I was only around the corner from my house, and I was on a street I’d been on many times before. The fact that I’d forgotten my own neighborhood was more jarring than actually being lost.

I may face Alzheimer’s again, whether through my parents, my relatives, or even in myself. It’s something many of us have to face. In the meantime, I work out my thoughts and feelings about Alzheimer’s through my characters, letting them make mistakes or figure out triumphs on my behalf, and hoping that someone else who is caring for someone with Alzheimer’s will find a friend in the story.
About the Author

Crissi Langwell is a writer, blogger, and novelist. She has 9 published fiction and non-fiction books and lives in Northern California with her husband, their blended family of three teens and a ridiculous teenage dog. You can find her at crissilangwell.com.
Purchase Come Here, Cupcake
Posted by Jean Lee