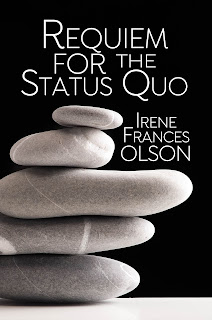 My name is Irene Frances Olson, and I survived being an Alzheimer’s caregiver for family members…twice.

My father, Don Patrick Desonier, to whom my novel Requiem for the Status Quo was dedicated, was the first such family member. The second family member was my sister-in-law who was diagnosed with mixed dementia just one month after my father’s death in 2007. My brother was an extraordinary caregiver for his wife; I was just the go-to person for advice, direction, and the occasional caregiving day. I guess having been front and center on my father’s three year Alzheimer’s path gave me an “edge” on experience.

My life after Alzheimer’s saw me volunteering as an Alzheimer’s Association support group facilitator. Concurrent with that work was my job as a certified long-term care (LTC) ombudsman for the State of Washington as an advocate for adults living in LTC facilities. All those experiences culminated in the writing of my first novel.

I started to write Requiem for the Status Quo five years after my father’s death. Back in 2012, it just seemed to me that what I experienced as my father’s caregiver was meant to go further than the confines of my own heart and experience. I was pretty certain a debut author wouldn’t make a ton of money, but that was okay with me because my goal in writing Requiem was to encourage and educate others who might be called upon to take on the role of family caregiver. I figured if I could ease the way for some, then I could at least celebrate that my family’s journey benefited others.

A peek at Requiem’s storyline:

Family caregivers are oftentimes ruthlessly challenged by uninvolved family members who are quick to condemn, but reticent to offer assistance. Such is the case for Colleen Strand, a widow who recently found her own footing who takes on the task of caring for her father, Patrick Quinn, recently diagnosed with Alzheimer’s disease.

Her older brother, Jonathan, criticizes Colleen at every turn and verbally abuses the father when he has the gall to exhibit symptoms of his disease. In short, Jonathan travels down the road of denial, leaving Colleen to deal with all matters regarding their father’s care.

Connected tenuously to a father who barely remembers her and a brother who has become an enigma, Colleen faces the moving target that is Alzheimer's disease, determined to clothe her father with the dignity he deserves, while struggling to squeeze every minute of time she can from him.

Now several months after my novel’s release, I take comfort in the blessings my novel has bestowed on others. Shortly after its release, reviews started pouring in from those who indicated that they could relate to the characters I chose to include in my story. Some readers even indicated they wished they had had access to my novel while they were still on their caregiving journey because they felt it would have opened their eyes more clearly and given them positive direction in the way things might have gone for their loved one.

Many readers, male and female, said they were glad to have a box of tissues handy, both for the sorrowful episodes and the humorous ones found on the pages of my novel. As anyone who has gone through this experience can attest, humor can certainly be found, even in one of the least humorous diseases known to man.

My current journey remains to get my book in as many hands as possible. I continue to hold author readings at senior centers and long-term care housing communities and I offer my novel at a highly-discounted rate to those seniors. If they are not able to pay, I simply ask for whatever donation they are able to provide. As long as they read my book and pass it along to others, I’ll be a happy camper, regardless of the bottom line.

It is such an honor being a part of the AlzAuthors community. I consider my membership in this community as a major highlight in my publishing career.